TREKKING bug bit me when I did my first trek in Central Asia. Subsequently, I mounted (well, almost) the highest peak of Coorg in Karnataka. I gained the enough motivation to mount the highest peak in Maharashtra (My Home State). It is the most challenging trek of my life till now. The peak in question is Kalsubai Mountain.

Kalsubai Mountain is located in the Western Ghats

It is the highest peak in Maharashtra (Western State Of India)

Kalsubai temple is situated on its peak

Starting Point of the trek is Bari Village(Approx. 150 Kms from Mumbai) 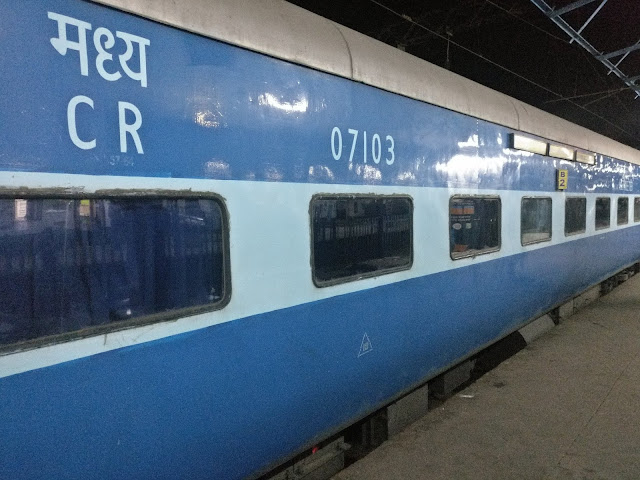 HOW TO REACH BARI VILLAGE(STARTING POINT) FROM MUMBAI

Second option (the one I took) is to catch a long distance express train (Sleeper Train) from Dadar Railway station (Prior booking needed) to reach Igatpuri Railway Station. The one I took was Mahanagari Express (Train No. 11093) departs at 12.20 A.M. from Dadar. It reached at Igatpuri Railway Station around 3 A.M. The good thing about this ride is you can lay down and take a nap to gain/retain the much needed energy. From Igatpuri you can catch the bus to Bari Village. It is one hour long ride. Igatpuri bus station is located around 5 minutes walking distance from Igatpuri Railway station. The first bus leave from the bus station around 5 A.M.

By Road: You can also drive to Bari Village. It is Approx. 150 Kilometres from Mumbai.

I reached the starting point around 6 A.M. It was cold and still dark. I waited for the light while sipping tea and warming up from a small bonfire. I started the trek around 7 A.M. I navigated through the Bari village while witnessing stunning views of nature and sunrise. I kept looking at the clear blue sky which is sorely missing in Mumbai. The trek seems quite easy for half an hour or so but it gets harder and harder. The cold has been subdued by then. The best part was no humidity even during the afternoon when the temperature rises. As I keep going higher and higher, the view gets better and better. I reached the camping site relatively faster. As per a local guy the time taken to reach the peak is one hour from there which motivated me but little did I know he meant one hour as per his abilities. The trek gets real from the camping site. The path onwards was rocky, steep, dusty and filled with dwindling iron stairs. Half an hour later I was exhausted and stopped at one of the refreshment shacks to get the much needed break. Half an hour more later the trek seems never ending as the mountain keeps getting bigger and bigger with NO peak in sight. I was amazed by the local kids who were climbing the mountain effortlessly but the real motivation comes from an Old Man in his late 50s who is not giving up and keep on going. After some time, I finally saw the peak but with no respite as the peak was really really far but with target in sight I felt reassured. I finally reached the peak around 11 A.M. The view from the top was nothing like I have seen till now. It was mesmerising. I thought to myself “View alone is worth the effort”. But the effort was far from over. After resting for sometime while feeding myself and the monkeys, I started my descend with a notion “Descending is much easier” but nope. Wrong! Descending was like unraveling a puzzle. One wrong step and Dhadaam! I need to strategically and realistically put my feet to maintain the balance while avoiding the slippery pebbles. It was fun at first but after sometime the routine gets tiring and mundane. Fortunately, the descending gets bit entertaining due to attack of a monkey 😉 While descending from one of those iron stairs, a monkey snatched one guy’s glasses. The guy was adamant on getting his glasses back and after good 10 minutes, he successfully tricked the monkey in throwing his glasses away! The whole episode leaves everyone in splits. While descending I met a family with kids which make me questioned my fitness level. I made the trekking pole out of wooden stick and manged to reached the base around 3 PM. It took me approx. 8 hours to do the whole trek with many breaks in between. I was extremely exhausted by the time I reached the base. I was finding it hard to even walk. I approached a restaurant cum home in the village. After freshening up, I had a delicious food followed by a nap. It felt like someone gave me a new lease of life. The thing is the trek is not flat and does not have much walking. For the most part, it is literally climbing the mountain. Mounting the highest peak in Maharashtra is a little personal achievement for me. It gave me a boost to seriously think about achieving my current goal of Trekking to Everest Base Camp!

HOW TO REACH MUMBAI FROM BARI VILLAGE

Again, you have same two options but there is a limited transportation available from Bari village to reach Igatpuri Or Kasara. Bus timings and services are erratic.

I catch a bus to Kasara. The bus timing to reach the bari village is 6 P.M. and it was 15 minutes late. It was approx. 90 minutes ride. From Kasara I catch a fast local train (Non sleeper and no pre booking needed) to reach Dadar Railway Station! Two hours ride.

If you have time, I recommend you to camp on the mountain and descend on the next day

Start the trek early in the morning if you are looking to return back on the same day Or Start post afternoon if you wish to camp on the mountain.

I did the trek in December. While the weather was nice and cool with no humidity(Big change from Mumbai) but the most part of the trek was dusty. So, Best time to do the trek is during monsoon season as recommended by the locals

Limited transportation available from Bari Village. I catch a 6 P.M. bus from Bari to Kasara

There are ample refreshment shacks on the way to the peak

No Mobile Network or low connectivity even at the base

Must Visit Places In Meghalaya: Cherrapunji and Shnongpdeng

Things To Do On Your First Trip To Manipur

How To Do Dzukou Valley Trek By Yourself: My Trip To Nagaland