Continuing from my previous post. After mounting the Chandrashila peak in Chopta, My next destination was Joshimath. There was no public transport available between Joshimath and Chopta due to the off-season. Only private taxis were available. The distance between Chopta and Joshimath is approx. 140 Kms. The next village is Mandal from Chopta on the way to Joshimath. The distance between Chopta and Mandal is 26 Kms. I decided to cover this distance by walk in the hope to hitchhike in between. There is some public transport available from Mandal for the next town i.e. Gopeshwar as told by locals. 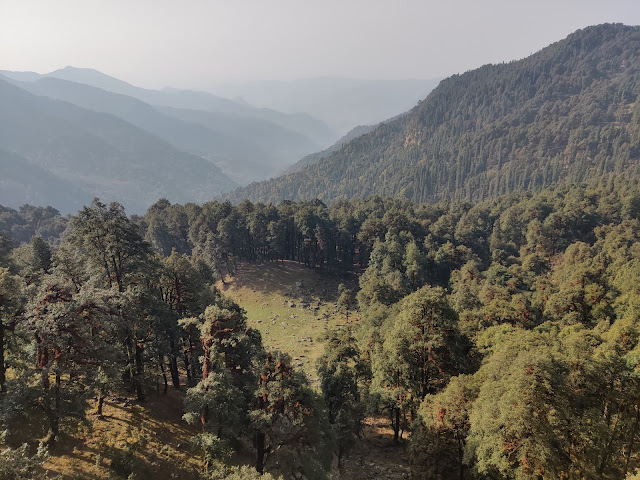 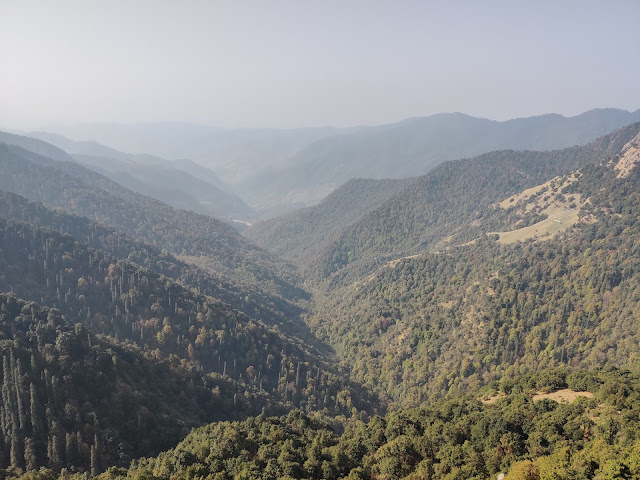 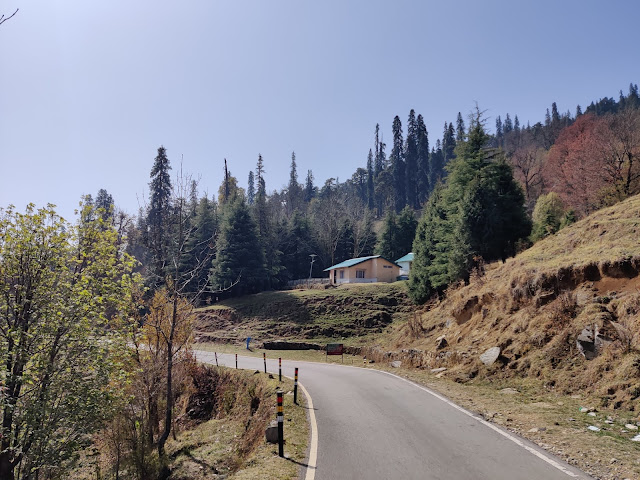 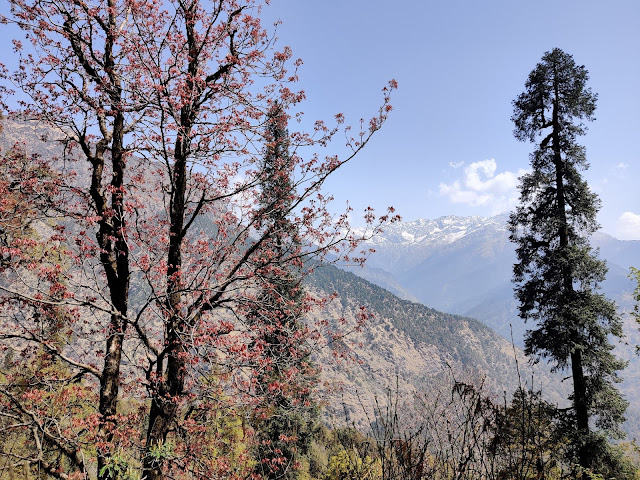 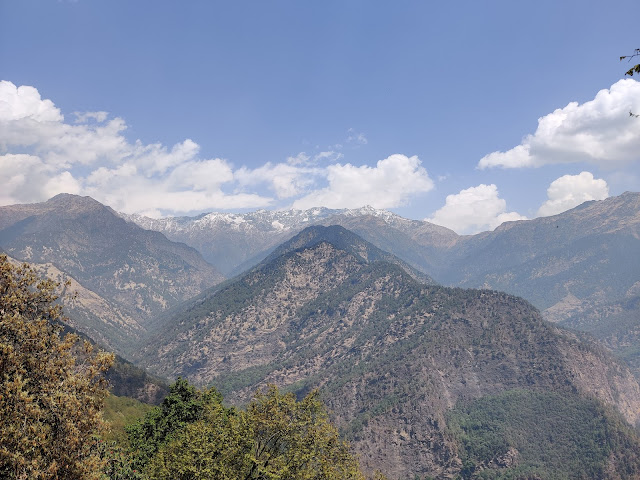 I started early in the morning. I was enjoying the mesmerizing view of the mountains. Only after 20 minutes of walk, I got a ride in a truck for 2 Kms. It was a good sign for me! I was happy to know that this road is not as deserted as told by locals but I was so wrong. I walked, walked, and walked. I saw only Himalayan Tahrs and plenty of Grey langurs. I covered 19 Kms with a couple of vehicles passed by and they were all full. Finally, a vehicle stopped who was going to Gopeshwar directly and gave me a lift till there. From Gopeshwar, I took a sharing vehicle(INR 25/-) to Chamoli. From Chamoli, I took another sharing vehicle (INR 110/-) for Joshimath. After reaching Joshimath, I met another traveler who was looking to go to Niti Village. We hired a private vehicle for INR 3000/- for the round trip to Niti Village. Our driver Mr Surendra(His number is 7895855544) was really cooperative. The reason for hiring the private vehicle was there was no public transport available in the month of April since all the residents of Niti Village leave their homes for 6 months due to excessive snow in the village. They start returning back to the village only in the month of May. 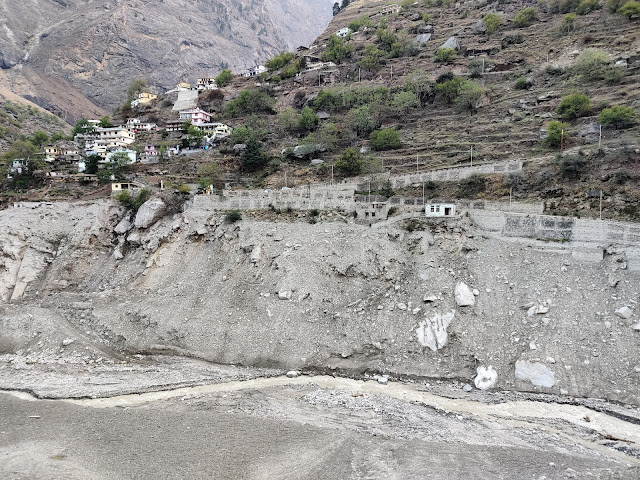 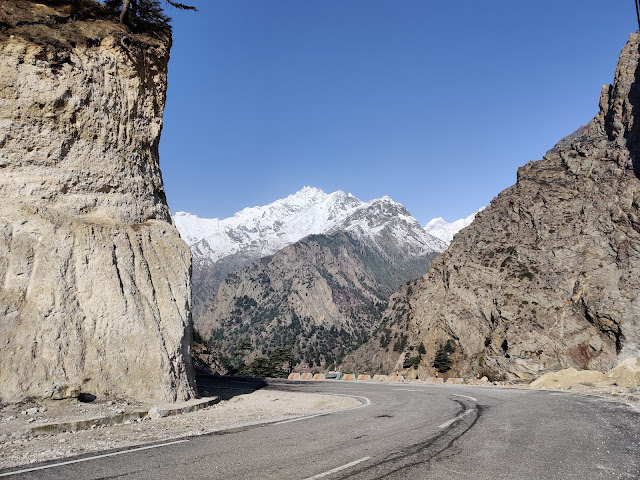 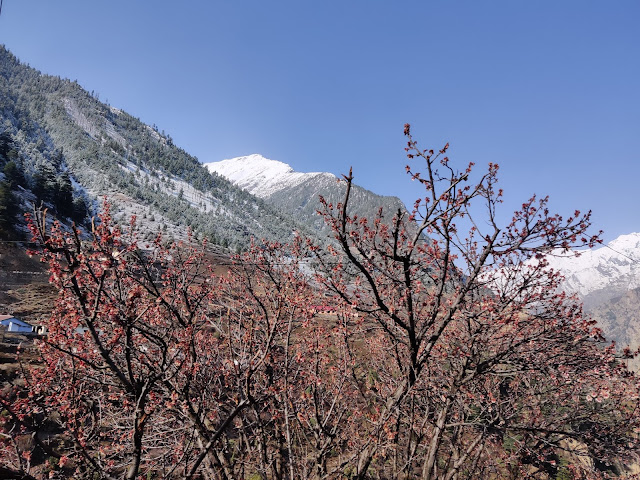 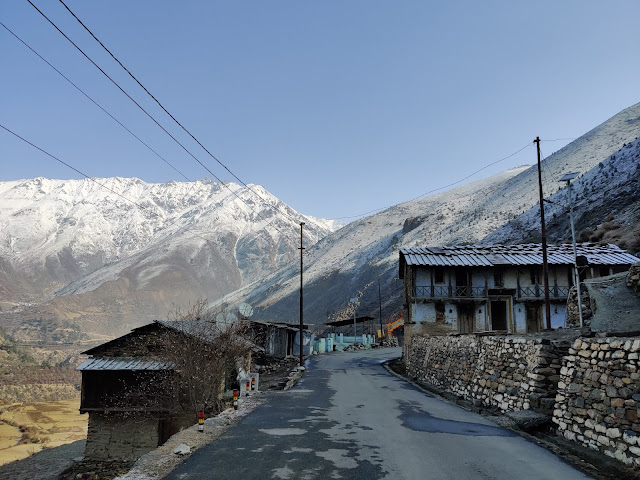 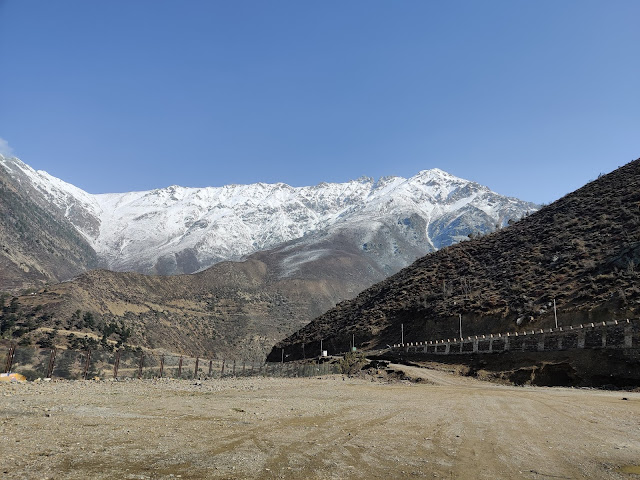 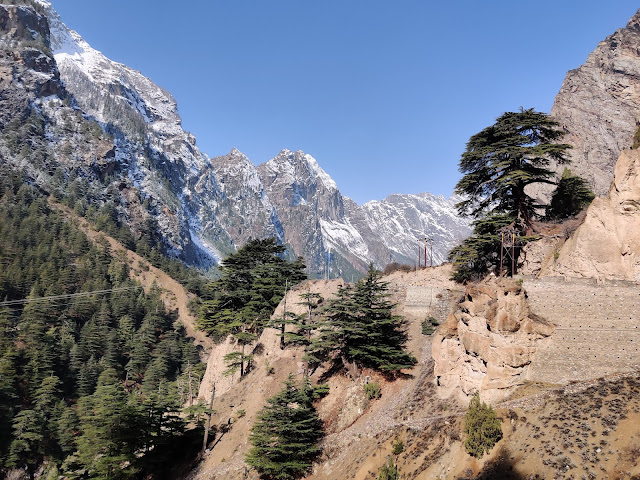 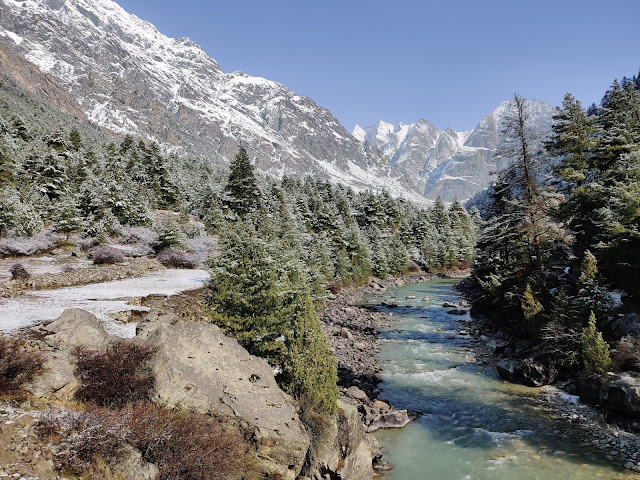 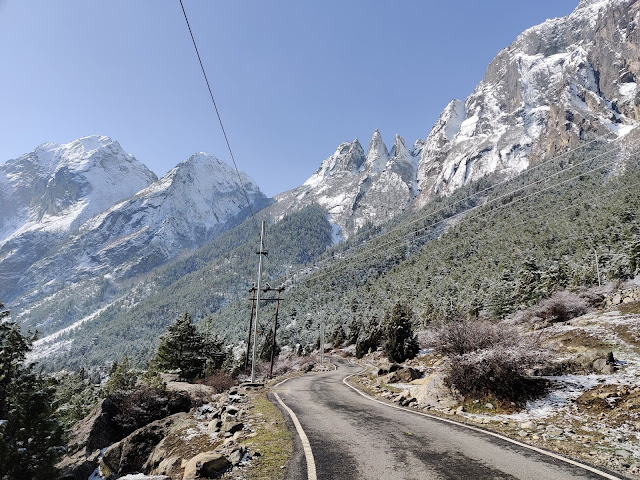 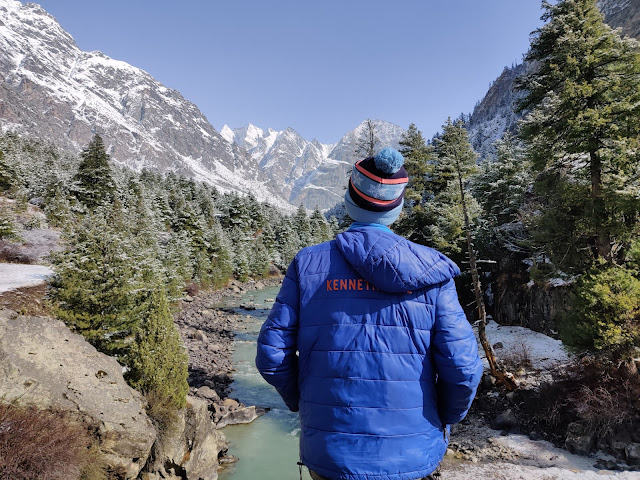 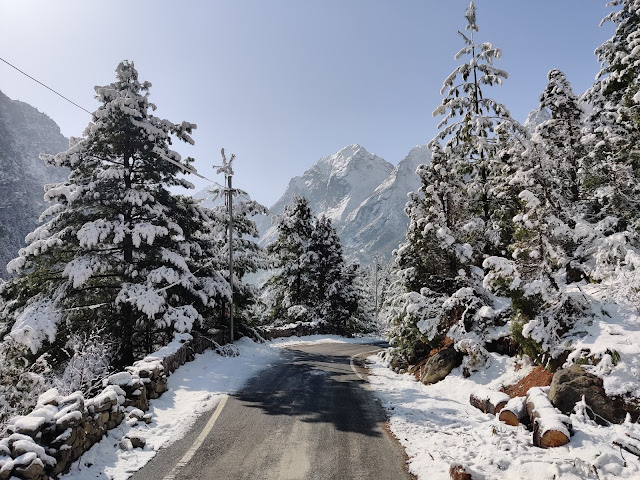 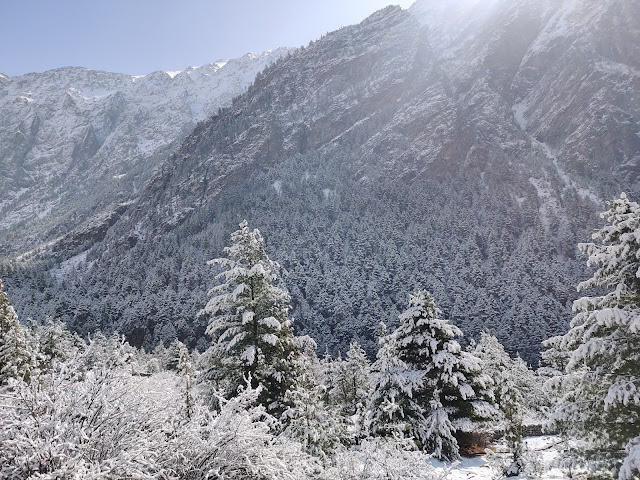 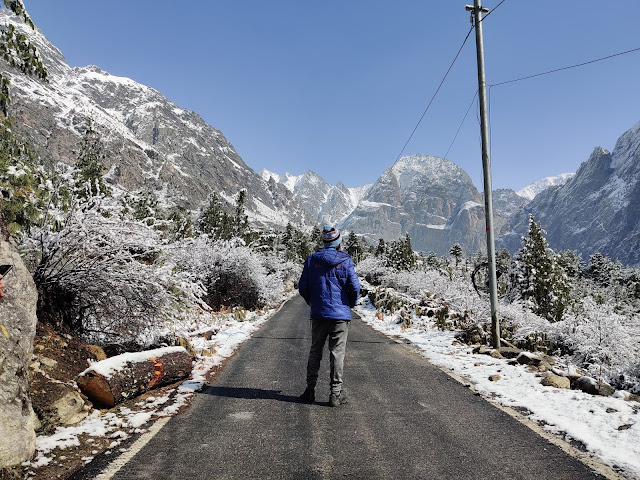 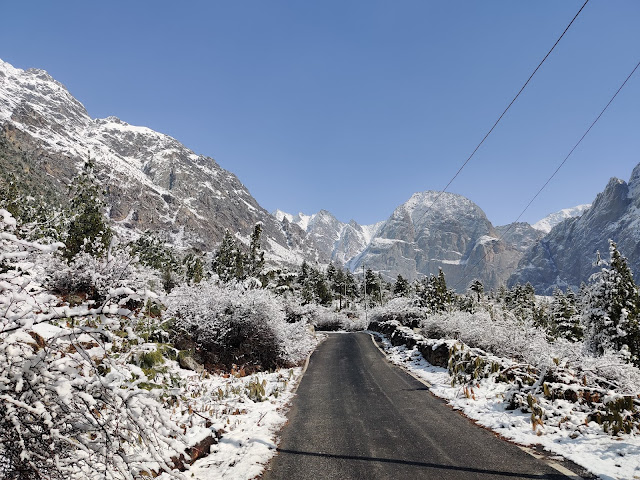 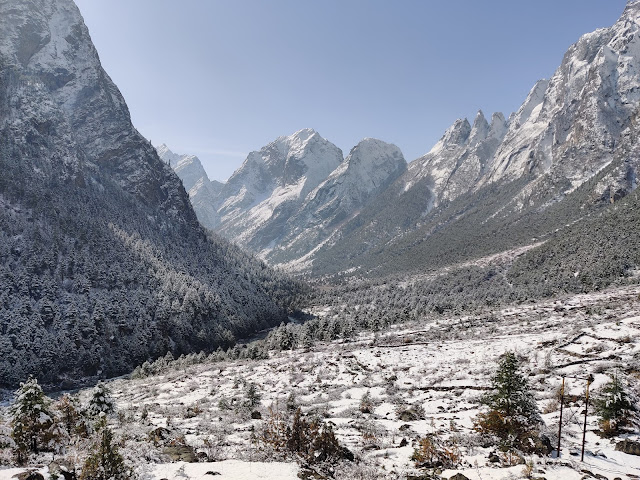 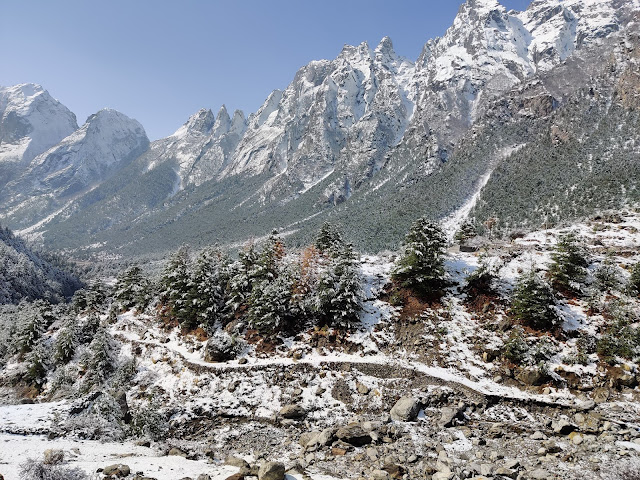 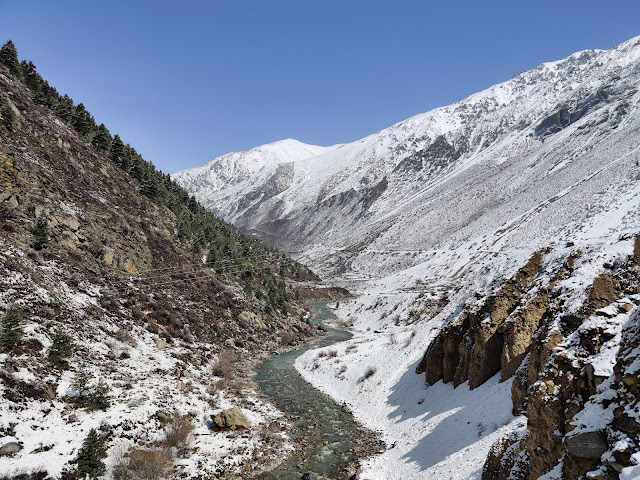 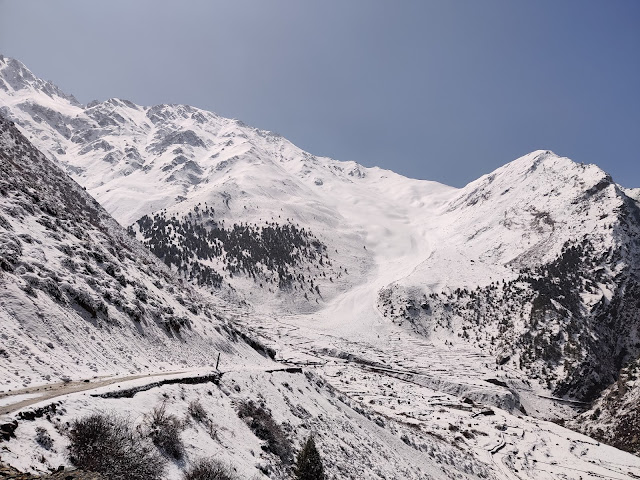 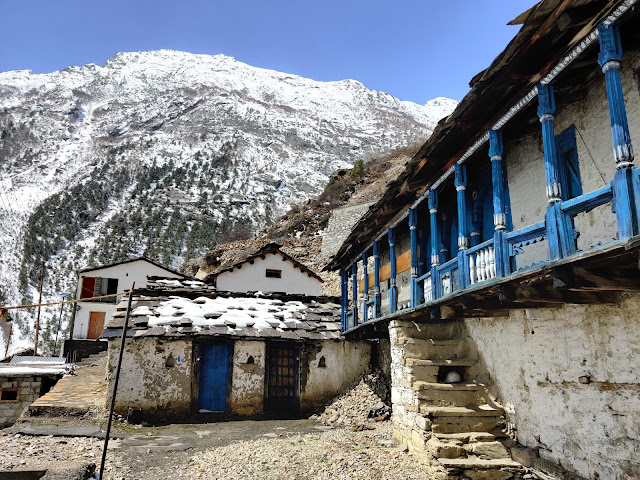 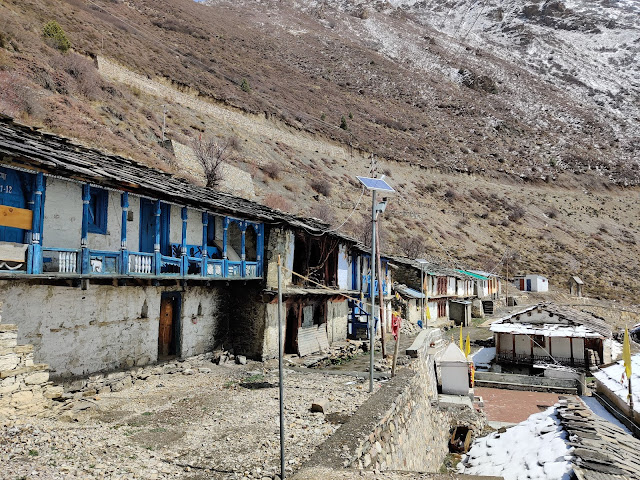 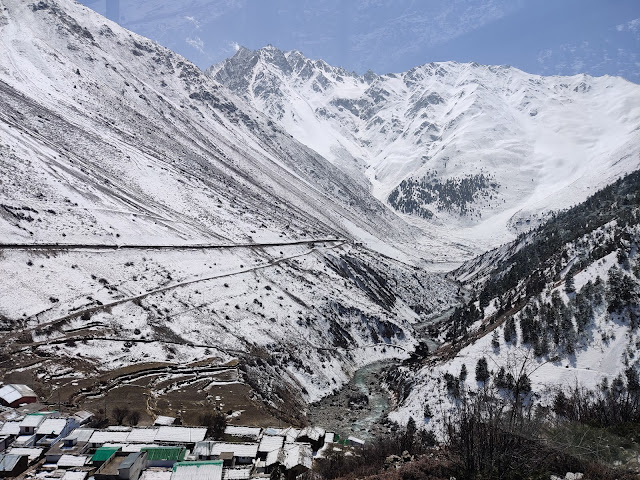 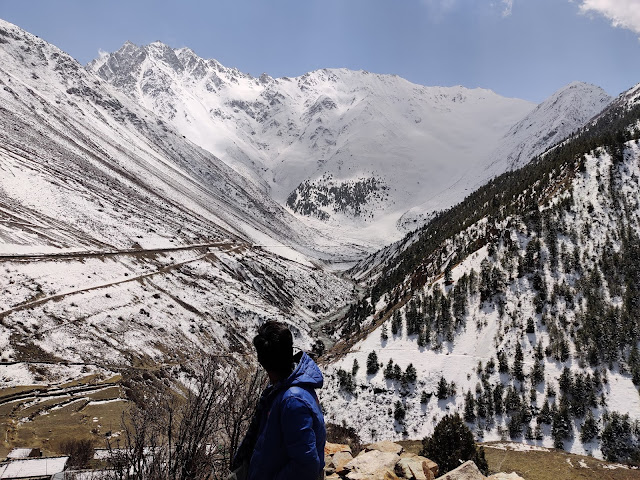 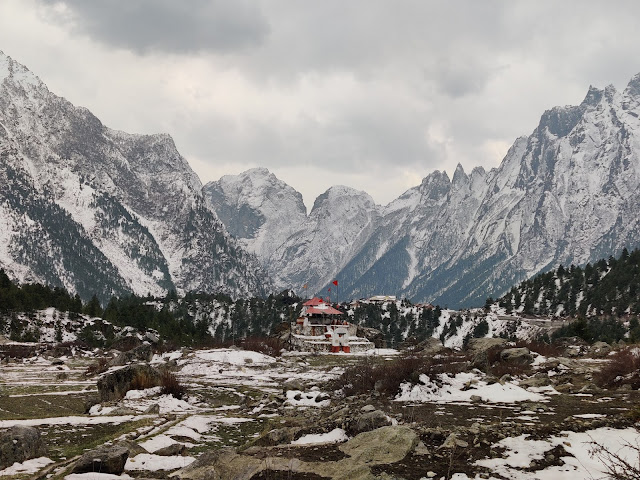 I always get fascinated by the offbeat places. Niti village is not a tourist place so to speak. The idea of going to the remote village near the India-Tibet border excites me to no end. Also, in my traveling experiences, the offbeat places are not populated by tourists and therefore you get surprised by their untouched beauty. That was exactly the case with Niti Village. We started our journey early in the morning at 5.30 am. It took us more than 4 hours to reach the Niti Village thanks to many stopovers to capture the beauty of spellbinding landscapes. Our first stop was the Hot Springs at Tapovan. The natural hot springs are the perfect place for locals to beat the cold weather. Our driver showed us the sites where the recent destruction happened due to the Glacier burst. It was astonishing to see the damage done by nature. It reminds us of the fact that Nature is really beautiful and it can be really cruel too sometimes. For that, we must preserve Nature and educate our current and future generation about Climate Change. We continued our journey. The higher we go, the lower the temperature drops. We were in the awe of the landscapes we were witnessing thanks to the recent snowfall. An hour before our destination, we came across beautiful trees with snow residuals. It was such a dreamy view. It felt like something straight out of a fairy world. After passing a couple of army barriers, we finally reached a bridge and got stuck there due to excessive snow on the road. Our driver informed us that it is not possible to go further on the vehicle. We were around 2-3 km away from the Niti village. “I am walking” was my response to the situation. I couldn’t let go of this chance of visiting the last village on the India-Tibet Border. When I was about to cross the bridge, I saw them (The driver and the fellow traveler) following me. On the way to the village, we saw a white mountain completely covered with snow. A perfect place to do skiing. It was really majestic. When I reached the village, I met a couple and a few workers from Nepal who were there for work. I explored the village and found out that almost all the houses were locked. I reached the top of the village which is a viewpoint of the valley. I have solo traveled to 17-18 countries till now. In all those travels, there are some moments/places that are still etched in my mind. The memories which are keep coming back to me during my “better” meditation sessions. One such memory, I created that day. One of the most stunning views I have seen in my life. A beautiful mix of Spellbinding imagery, soothing calm, and grand landscape. I meditated for half an hour and It felt like I was transported to a utopian world. That feeling was really really special. At that moment, I felt free. I can be anything. I can do anything. I don’t know how to articulate it. It was one of those “you need to live it to understand” experiences. I was high without being high haha. I was listening to music when some army officers approached me and suggested we leave as there’s a possibility of an avalanche. We listened to them and retraced our steps back. While walking back to our vehicle, I stopped to drank water from the Dhauliganga river. It is one of the sweetest water I have ever drink. Most of the snow was melted or removed during our return journey. During our return journey to Joshimath, I kept thinking about those unbelievable views.  I live for these kinds of travel experiences. Here’s hoping for many more in the future! The Indian Himalayas are truly majestic and I can’t wait to explore more of them. Stay Tuned!

4 Must Visit Places In Kerala