NETHERLANDS will always have a special place in my travel memories as It was the first country I solo traveled to. It was the stepping stone to my solo adventures. It took me one year to travel there since I first thought about traveling there. Thanks to my visa adventures which deserves a separate post. My Air France flight had a layover in Paris. From Paris i catch the KLM flight to Amsterdam.

The moment I stepped out of Amsterdam airport, it felt like I entered in this big freezer. It was chillingly cold. If that is a phrase. I visited Netherlands during Jan-Feb and I experienced cold (or should i say dry windy cold) after more than a decade because I lived in a place where we don’t get a winter season! Even in my hostel room or any indoor spaces I don’t feel like removing my jacket. It was surreal. I saw a dude jogging around in vondelpark wearing shorts and half sleeve t-shirt. I thought “WOW! Here I’m wearing layers and layers (even I lost count) of clothes and still going burr. This dude must be a superhuman!” A person traveling solo for the first time outside his country in an unknown cold place. I know it sounds all gloomy and bleak but thankfully it was nothing like that! 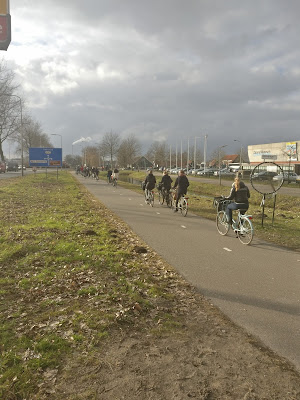 I learnt how crucial is Internet when you solo travel! Since i didn’t bought a local Sim card, I rely on open Wi-Fis and on the kindness of strangers for directions and suggestions. Luckily, Dutch people are one of the friendliest people I have ever met. After a while i start enjoying asking directions from dutch people and almost every time i met with genuine smile and helpful nature. This one dude even went up to his 3rd floor apartment just to get his phone and helped me with the directions! Most dutch people speak good English. In places like Amsterdam it gets really difficult to identify between a local and a tourist since the city is swarmed with tourists. Best way to identify locals is to always approach people with bicycles. Dutch people love to cycle. They even have a separate lane for cyclists! 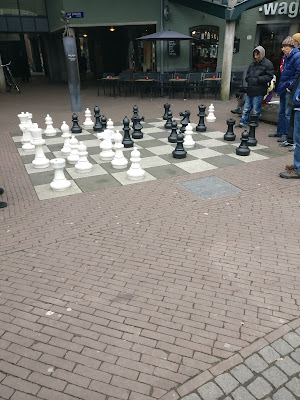 To begin with i hate hate gambling. Any form of gambling. Worst kind of addiction. But i wanted to experience the same once in my life. So i went to Holland Casino in Amsterdam. I bought a 5 euro (yep!) chip. The lady at the counter looked at me twice. I wanna try my hand at roulette (thanks to cool moves i saw in zillion movies). Before betting i closely watch other people since I was a complete beginner. After watching several rounds, I finally bet on red pocket since ball drops in red pocket on all the previous occasions. And on my turn it dropped on black pocket. Well, it’s good I hate gambling and that was the end of my career as a gambler. Nearby, I enjoyed watching people playing a game of chess.

I bought a Holland Pass at 75 Euros which enables me to visit below six attractions (chosen by me among many other options) without any extra cost:
Body Worlds Exhibition: Exhibition explores the question “what is true happiness?” For each individual meaning and scope of happiness varies. It is an interesting topic to explore but to be honest I was really tired at that time and didn’t enjoyed the exhibition.
Amsterdam dungeon: It was supposed to be a fun scary show divided into 8 segments. Overall it was underwhelming for me. Best to visit with kids.

First two things that comes to any young mind when we talk about Amsterdam is Weed and Red Light District since both are legal in Amsterdam. Here’s my Experiences: 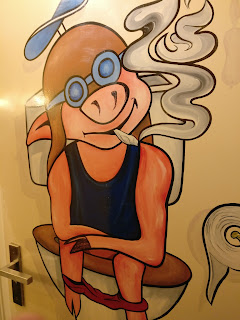 Space Cakes: First thing I noticed after entering my hostel’s room was someone’s nicely placed weed and pipe. It was quite tempting and i would have smoked that thing right there if I don’t hate smoking so much. Just hate it. So, the only alternative to taste the weed was Space Cakes! As soon as i get my hands on space cakes, i want to eat it as soon as possible. I finally ate it on my last day in Netherlands. 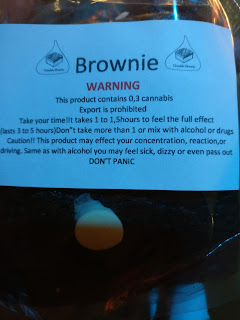 It was kinda tasteless. Even though it says it will have a effect only after 1-1.5 hrs but took more than that. When the effect of space cakes finally kicked in, I find it bit hard to concentrate. I bought some unnecessary items at the exhibition’s store. I was feeling hungry so I ate half a kilo French fries with ketchup. Bought some more things from another store. Rest of the night I spent walking around the city being stoned while listening to music buzzing through my earphones. When I reached my room I was fast asleep without even changing my clothes.Thankfully I put on an alarm a day before since I had an early morning flight to catch tomorrow!
Red Light District: While navigating through cosy lanes I stumbled upon red light district. It was not much crowded as it was relatively early. Few ladies were out in glass chambers. Whole street were illuminating with fluorescent lights. This one shop has a big crowd. So I went inside and saw many youngsters waiting to see a Live peep sex show. 2 minutes for 2 euros. I decided to give it a try myself and it was one of the most unsexiest things I have ever seen: An old man and a woman were having sex in such a mundane and mechanical manner. I left within a minute and with this my red light district adventure comes to an end.
MY FAVOURITE EXPERIENCES
Anne Frank House: I had an emotional and enriching experience while visiting the Anne Frank House. It’s like watching a beautifully constructed well intentional inspiring film. It ends with the montages of famous people talking about their experiences of visiting Anne Frank House. Really inspiring. I wrote this comment in their guest book. I quoted Kubrick “However vast the darkness, we must supply our own light.”
Stadsschouwburg: One of the things I really wanted to do in Amsterdam was watch a play. Luckily, there was a stage adaptation of Woody Allen’s film “Husbands and wives” playing at Stadsschouwburg. It was in Dutch with English surtitles. But the only problem was ticket’s too costly. So I went there to see if any discount is possible. I reached the ticket counter zigzagging through the high-end restaurant. At the cash counter i met a really nice lady named Myrthe. We talked about the play and Woody Allen’s films. I asked for any possible discount and she gave me an awesome discount and a great seat. She was quite gentle and nice with me. I was very happy after proclaiming my ticket! At night i reached the theatre to catch the play. Stage was filled with furniture. Stage and Surtitles were clearly visible from my seat. From the moment play started I was completely absorbed by it. Sets, energy, performances, music, co-ordination were truly wonderful. It was an outstanding and exhilarating play. I had such a wonderful experience watching this play which I will cherish for long time. 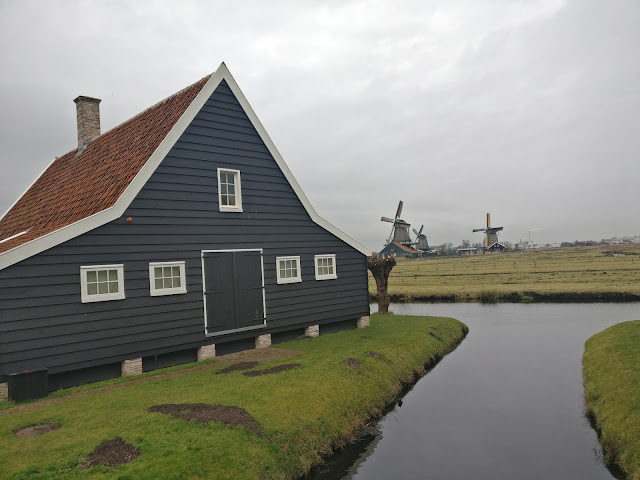 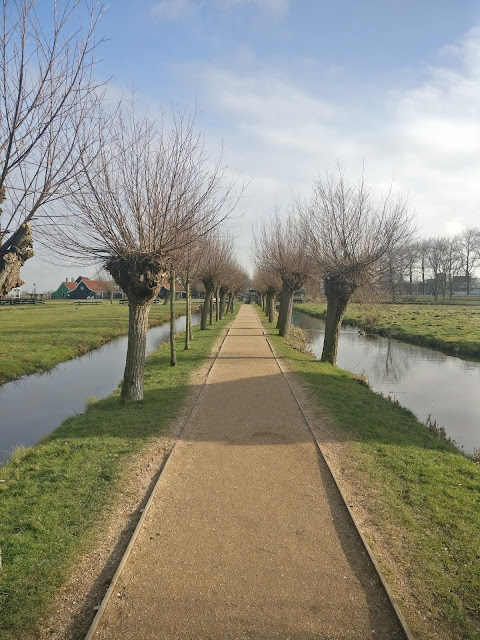 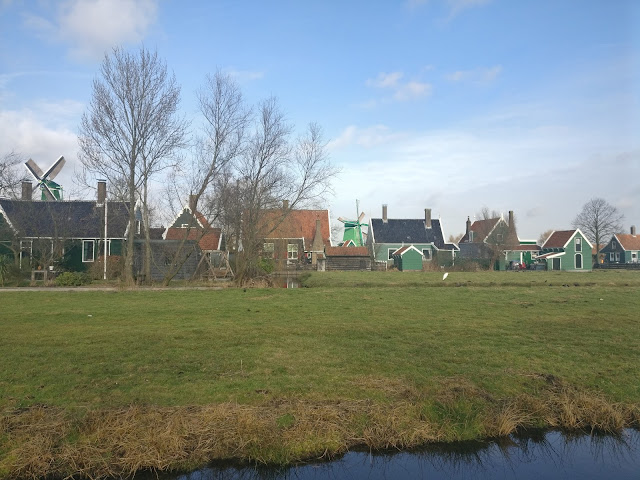 Zaanse Schans: From Amsterdam Central Station I catch a bus to Zaanse Schans. It is a small quiet town. I get down at Zaanse Schans museum. The view was just breathtaking. There are many historic houses and windmills surrounded by water. I explored the neighbourhood and had a really good time while enjoying the nature. Peace of mind.
Film Eye Institute:  Since I’m a big Cinephile. A visit to Film Eye Institute was mandatory. After reaching Central station I took a ferry(free of charge) which took me to the other side of the IJ river. On the other side Film Eye institute building is situated. At that time they were showcasing Bela Tarr’s films exhibition. I had only seen one of his films and was equally bored and fascinated by it. Inside exhibition, there was a huge tree mounted at the corner of the room with wind blowing and leaves flying all over the room representing one of the iconic scenes from his films. Followed with many dark rooms showcasing the clips from his iconic films. Scenes were quite moving and powerful. It was a fulfilling experience. I spent sometime at the restaurant which has the gorgeous view. 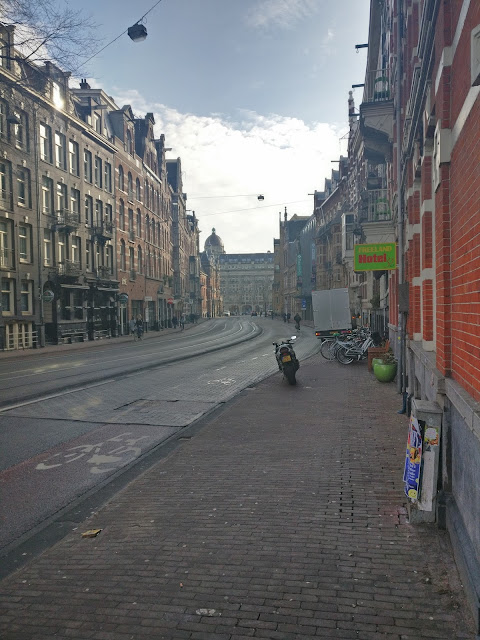 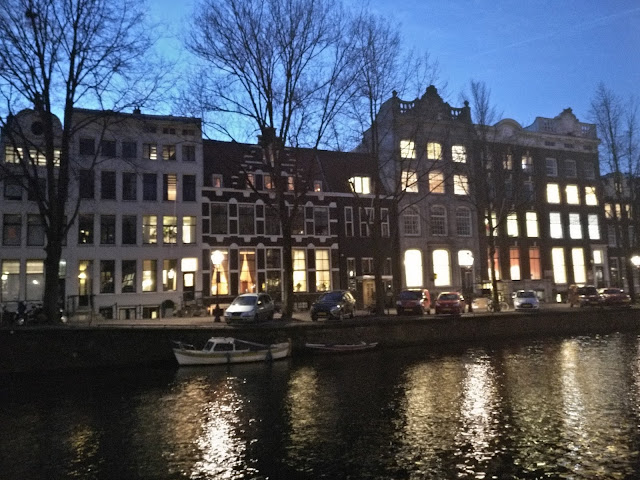 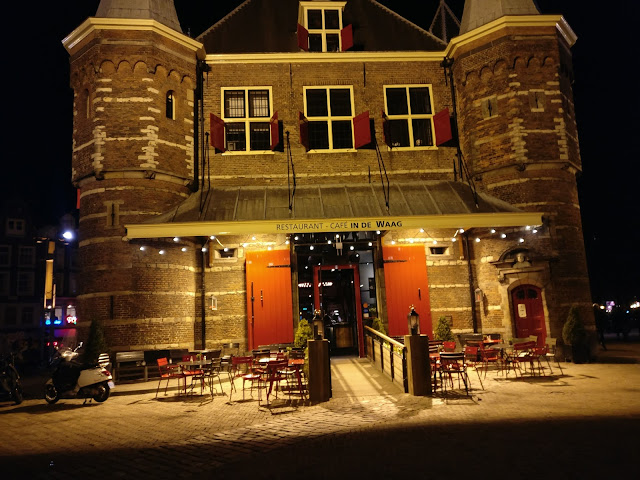 Night Walks: Those night walks in Amsterdam are still reeling in my mind. Every night i used to walk back to my hostel which took anywhere between 15 to 35 minutes while listening to “Aazaadiyan” (Freedoms) song from the film “Udaan” (Flight) on a loop. Even today whenever i listen to this song, it reminded me of Amsterdam.

Parting Thoughts: I experienced many things for the first time on this trip which made this trip even more memorable for me. I was touched by people’s generosity. It’s not like i met only good people. I came across few assholes too but there are more good people in the world than bad people. I always try to remember this.

I discovered myself. Like someone said you don’t just learn things about the place but about yourself too when you travel solo.
I saw my own city with new perspective when i get back and realised how we under-appreciate the place we live in.

Finally, I’m leaving you with one thought (pic below) which i read in Amsterdam and still trying to live my life by it. 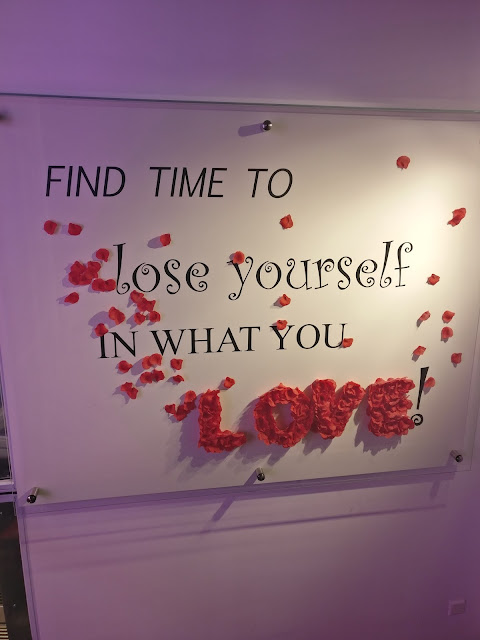