PAKISTAN! As mentioned in one of my previous posts i.e. “When I Almost Reached Pakistan“, visiting Pakistan was on my bucket list since a long time due to no provision of Tourist visa on both sides. On 9th November 2019 Kartarpur corridor was inaugurated which connects Dera Baba Nanak in India to Kartarpur in Pakistan. Sri Kartarpur Sahib Gurdwara is located in Kartarpur. It is a holy site for Sikhs as the first of the Ten Gurus of Sikhism “Baba Guru Nanak Ji” lived here for 18 years until his death. I see this as a great opportunity to travel to the place I was longing to visit for a long time even though it was only for 8 hours! At the end of November, I and my cousin brother from Punjab decided to visit Sri Kartarpur Sahib together. We both got our confirmations and were all set to visit Sri Kartarpur Sahib in Pakistan.

HOW TO APPLY TO VISIT SRI KARTARPUR SAHIB IN PAKISTAN

Any Indian National irrespective of his/her religion can visit Sri Kartarpur Sahib Gurdwara in Pakistan without Pakistani Visa. All one need to do is to apply online here. Passport is mandatory to visit Sri Kartarpur Sahib. After you applied, an acknowledgement SMS will be sent to you followed by police verification. In case of approval, a confirmation SMS will be sent to your mobile number two days before the visit date. You then need to download the ETA form from the same website via the “application status” column. For your visit, you need to carry Original passport and the downloaded ETA form with you.

We reached Amritsar at night and visited the Golden Temple. Visiting Golden Temple at Night was a completely different experience than I had before when I visited the Golden Temple during the daytime. At night, the Golden Temple looks even more magical and divine. From Amritsar, we catch the passenger train at 4.20 am to reach Dera Baba Nanak. The ticket cost was only 15 Rs per person. It reached around 6 am. From Dera Baba Nanak railway station, we boarded the free bus service started by the Dera Baba Nanak Gurdwara. We reached Dera Baba Nanak Gurdwara after 10 mins ride. After freshening up, we ate langar food at the gurdwara and leave our bags at Gurudwara’s cloakroom. It was quite easily one of the tastiest langar food I ever have. From Dera Baba Nanak Gurdwara, it took us 15 minutes by walk to reach the Passenger terminal building on the Indian side at India-Pakistan Border. Parking is available at the premises in case you are coming by own vehicle. We go through Indian immigration. Immigration counter opens at 8 am. They did the biometrics and click our photo followed by filling up of custom declaration form. Polio drops were also given but I did not take it since I already took it within a year prior to my trip to East Africa. If you have taken a polio drop within a year, make ensure to carry the proof for the same. Afterwards, we were escorted to the border in a kinda golf cart. 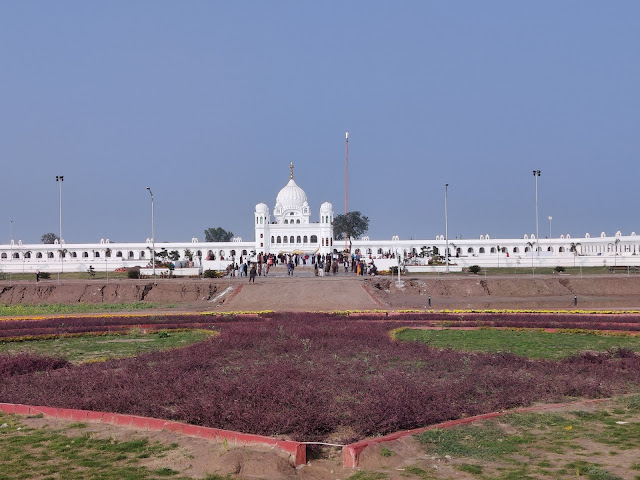 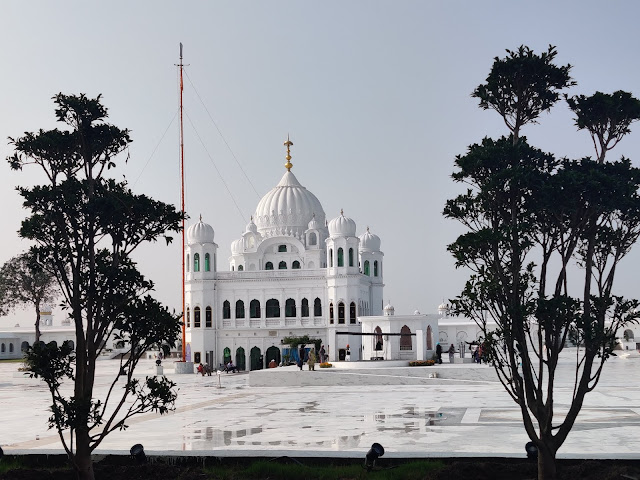 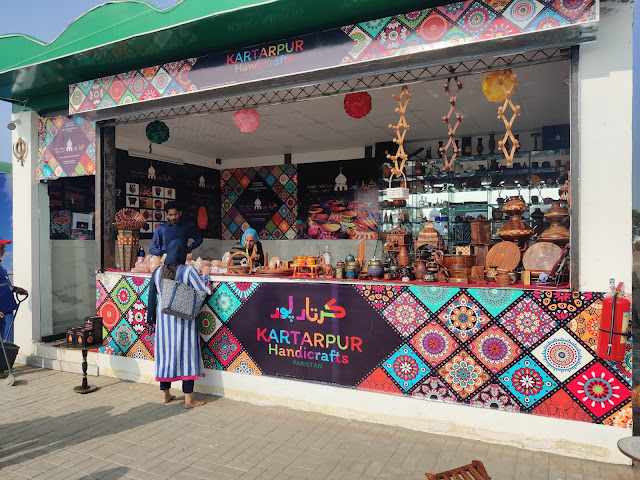 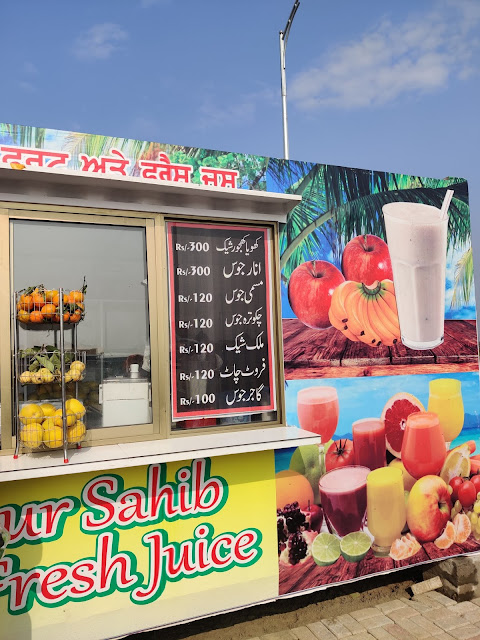 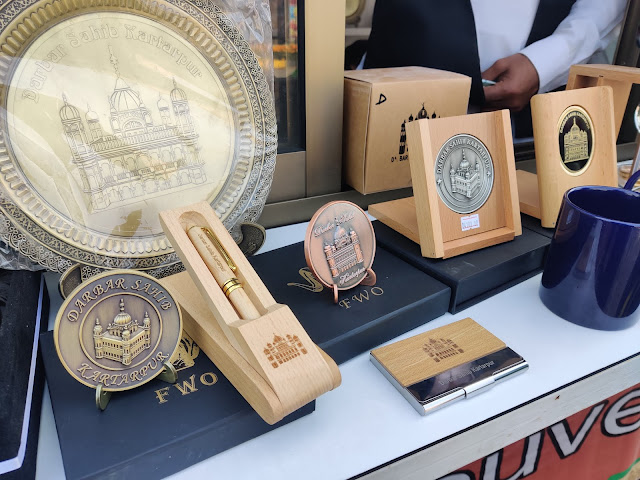 We were dropped just before the line of control and we crossed the line by walk to enter Pakistan! At the gate, we were greeted by the Pakistani soldiers. Similarly, we were escorted in a kinda golf cart to Passenger terminal building in Pakistan where our immigration took place with biometrics. After the immigration, we were given a yellow colour traveler badge. The guy who was giving out the badges were quite impressed by the fact that I traveled to so many countries and when told him I traveled to these countries alone. He was at a loss of his words. Our passports were not stamped. Neither in India nor in Pakistan. Indian immigration put a stamp on the ETA document and Pakistani immigration put a stamp on the backside of the $20 receipt. Before entering the passenger terminal building for immigration, we need to pay the $20 fee for visiting Sri Kartarpur sahib. I strongly recommend carrying the dollars from India itself as the exchange rate is very high in Pakistan if you convert there. At the time of my visit, they were asking INR 1700 for $20. You can even convert INR into PKR even though INR is acceptable at all shops in Sri Kartarpur Sahib. From there you can either walk to the Gurdwara Sahib or take a free bus service. We decided to walk the 3.5 km stretch. It took us approx. 45 mins to reach the Sri Kartarpur Sahib. On the way, we were greeted by the Pakistani soldiers. We crossed the bridge build over the Ravi river and saw some landscapes. We reached the complex which is quite big but still under construction. We cleaned ourselves in Sarovar Sahib before heading to Darbar Sahib. One felt at peace inside the Darbar Sahib. After the darshan, we were given delicious halwa as a prasad. Afterwards, we visited the Rehat Sahib. It’s a well Baba Guru Nanak Ji used for irrigating his fields. The field (Kheti Sahib) is nearby which is considered sacred. Many devotees were taking the soil from the field. We witnessed an emotional reunion when a Pakistani Sikh family met an Indian Sikh family. It was a beautiful moment. Then, there’s a big Nishan Sahib build parallelly to Darbar Sahib. Beautiful artwork about Sikhism can be seen at a gallery near to Darbar Sahib. There’s a huge hall build for Kirtan which was closed during our visit. At noon, we went to Langar Hall for Langar food which was delicious. Several Indians were also doing seva (Volunteering) at the Langar hall. There are many shops in the complex ranging from souvenir shops, restaurants, money exchange, garments shop, general store etc. They all accept INR. While buying a souvenir, I was bargaining with a shopkeeper. The way he replied in such an eloquent way in Urdu I felt like I did something wrong by asking for a lower price hahah.  One needs to come back to India before 5 pm. While coming back we took a bus instead of walking.  We chatted with several Pakistani Citizens at Sri Kartarpur Sahib. Indians were wearing the yellow colour badge and Pakistanis were wearing the blue colour badge. There were more Pakistanis than Indians at Sri Kartarpur Sahib. My cousin brother who speaks fluent Punjabi converse with some of them in the same language. We had some heartwarming and nice conversations. We met a Pakistani student who was really curious about India. We gifted him an Indian snack we were carrying. He felt really embarrassed as he doesn’t have anything to give us in return even though we told him several times it doesn’t matter. While coming back we were thinking if we all were wearing the same colour of badge, It would be difficult to identify who is Indian and who is Pakistani. We reflect on how some lines can divide people! Hope to see the world where humanity comes before everything else.

My 8 hours-long visit to Pakistan doesn’t feel like visiting Pakistan. It just felt like we were visiting a Gurdwara at someplace in Punjab. With this visit, my wish to travel to Pakistan become stronger. Hope to see that day soon till then I will cherish my visit to Sri Kartarpur Sahib Gurdwara in Pakistan! 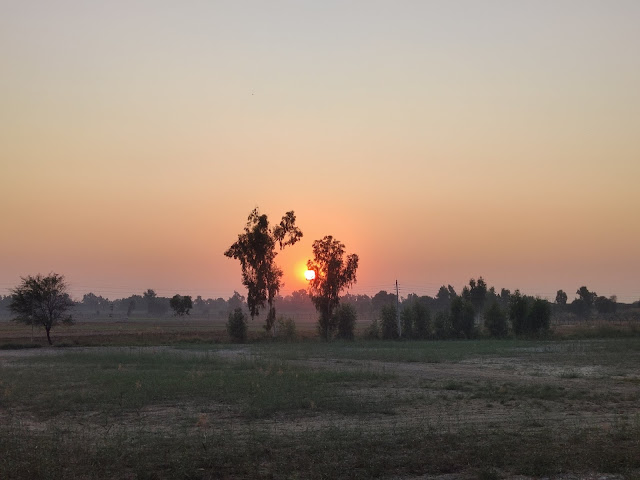