After my trip to Goa and Kerala, I came back to Mumbai and took a couple of months-long sabbatical from traveling. At the beginning of February, I was back on the road with an aim to focus on volunteer travel and acquire new skills. As luck would have it, I was back in South India. This time, the southernmost state of India i.e. Tamil Nadu. I found an organic farm near Madurai via Workaway and I booked my train ticket to begin my South Indian trip once again! During my 70-days long trip to Tamil Nadu, I volunteer at an Organic farm, an Ecologically sustainable construction site, an Organisation empowering persons with Intellectual disabilities, a Yoga Ashram, and Building Treehouse. My Central Asian trip gave me the confidence to pursue traveling full-time, My Latin American trip taught me the art of slow traveling. Similarly, I evolved as a traveler after my trip to Tamil Nadu and the experiences from the trip will guide my future travels. So here are my volunteer experiences in Tamil Nadu, India! 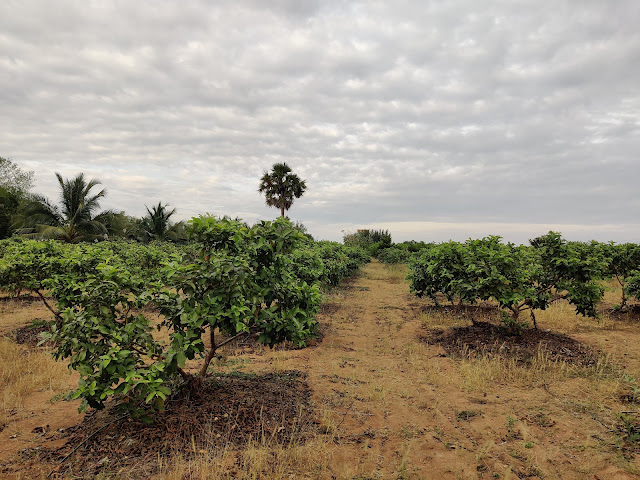 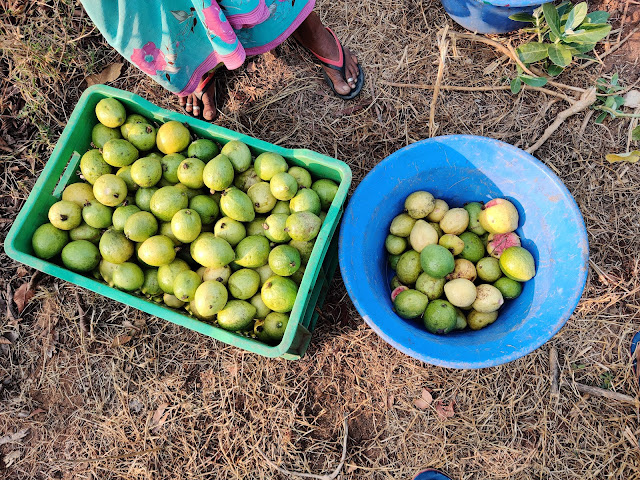 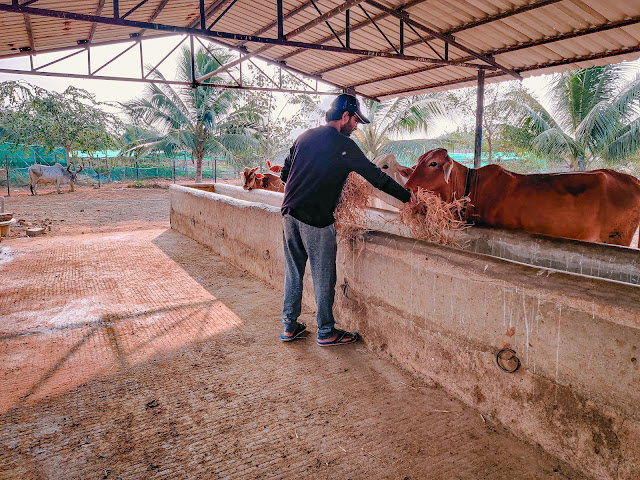 After a 30-hour long train journey, I reached the farm early in the morning. I was picked up from the village bus stand by the farm supervisor on his Moped. At the farm, I was greeted by the young co-owner of the farm. After the discussion, I went straight to have a much-needed sleep. During my volunteer stint at the farm, I tried my hand at different things. I assisted or worked alone in the following ways: Organising and relocating saplings in the Nursery and Greenhouse, Preparing new saplings, harvesting fruits, spraying, working with Livestock, transporting mud on a tractor. There are different types of vegetables and fruits grown on the farm but Dragon fruit is the dominating crop at the farm. I tried surinam cherry, Cocoa for the first time at the farm and loved it. My day used to start early in the morning to avoid the hot afternoons. I completed the mind-blowing and emotionally rich Sci-Fi Thriller novel i.e. “Recursion” during afternoons. After lunch, I used to work till 5 pm. The total working hours were 5 hrs a day. The meals were typically South Indian starting with Idly or Dosa in the morning followed by rice meals for lunch and dinner. At night time, I used to look forward to two different occasions evoking two drastically different emotions i.e. Anxiety and Joy. I am going to narrate both experiences and I leave it to you to associate your own emotion with them 🙂 Firstly, The night walk from my residential quarter to the dining area during dinner time was no less than an adventure as it was essential to walk with a torch. Not just because of lack of light but to keep the snakes away! A couple of times I saw a snake moving away into the bushes. Secondly, after sunset, a beautiful set of sparrows used to come and sit on the wires outside my residential quarter followed by their musical session. I was the only one volunteering at that point in time. The place had a soothing effect on me. It was the perfect place to begin my volunteer travels in Tamil Nadu. 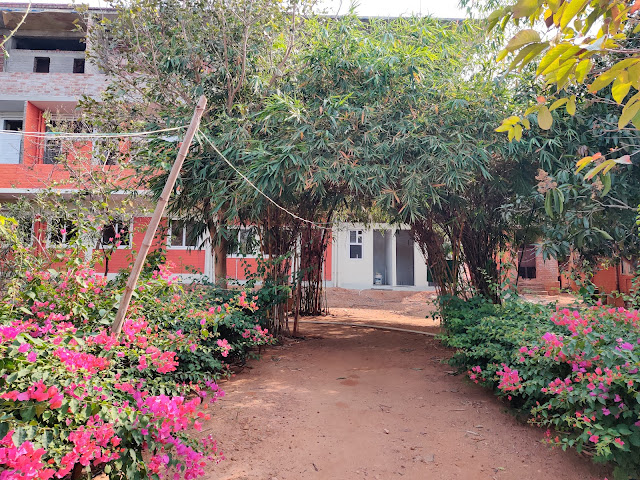 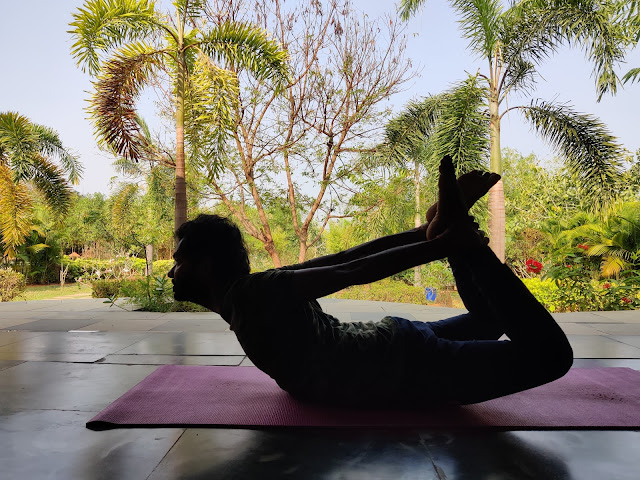 While volunteering at the farm, I came to know about the Sivananda Yoga Ashram near Madurai. I decided to spend some time at the Yoga Ashram to learn Yoga as a part of their program called Yoga Vacation. It costs 400 INR per day including food, classes, and accommodation. As I kid, I took some yoga classes and that’s as close as I came to yoga. The day at the ashram begins at 5:30 am with the sound of a gong. At 6 am, the meditation session begins followed by Satsang (Chanting). After the morning tea, the Asanas/Hatha Yoga (Yoga poses) class begins at 8 am. The class begins with Pranayama (the practice of breath regulation) followed by Surya Namaskar, Leg raise exercise, and 12 Asanas. The class lasts for 90 minutes. After the class, it’s time for Lunch-cum-Breakfast. It follows with Karma Yoga (Selfless service or you can say Volunteering) where we clean (broom and mop) in a designated place. After a much-needed rest and afternoon tea, there’s a lecture class where they talk about the benefits and meanings of Yoga. Like there are 4 paths of Yoga i.e. Karma Yoga, Bhakti Yoga, Raja Yoga (Hatha yoga is part of Raja Yoga), and Jnana yoga. At 4 pm there’s a second Hatha Yoga class followed by dinner and another meditation and Satsang session. The day ends at 9 pm. During my stay at the Ashram, I can feel the flexibility coming to my body. It was an enriching experience. I wish to continue practicing Hatha Yoga in order to better my Asanas. Daily Practice is the key! You can check about Yoga Vacation by clicking this link. I become good friends with a Tamil guy at the ashram who later invited me to his hometown in Southern Tamil Nadu and hosted me at his home. Tamil hospitality at its best! More about that in my next post 🙂 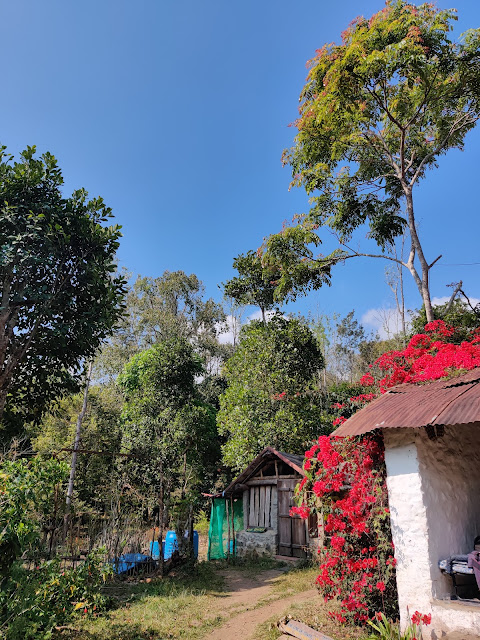 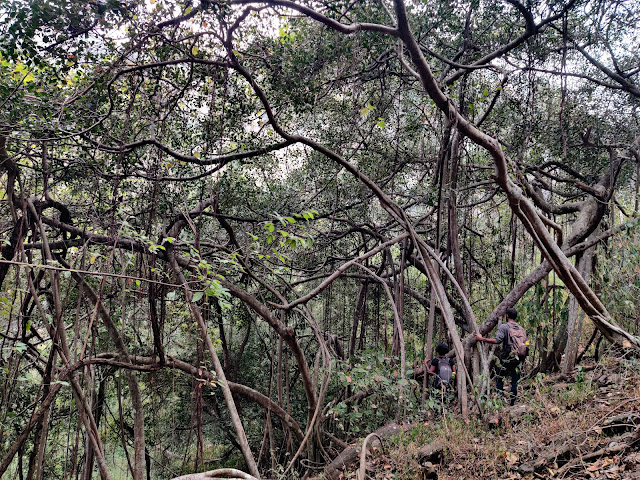 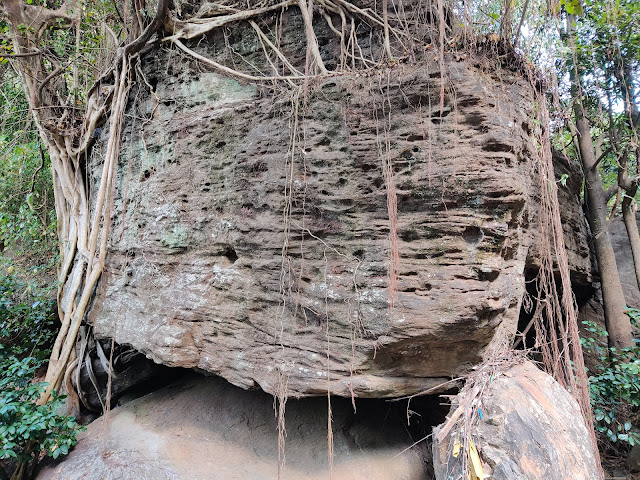 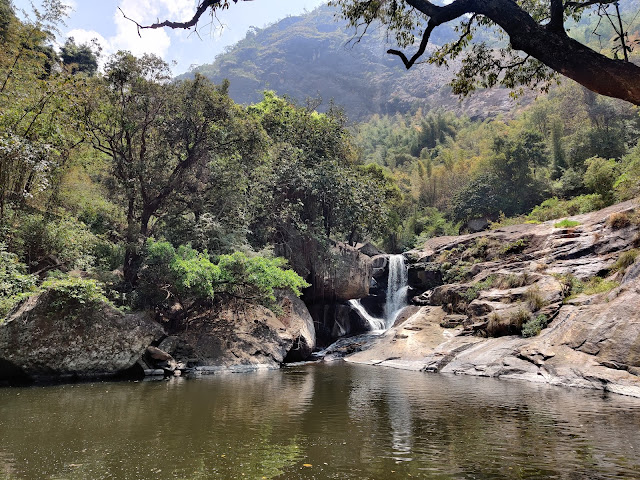 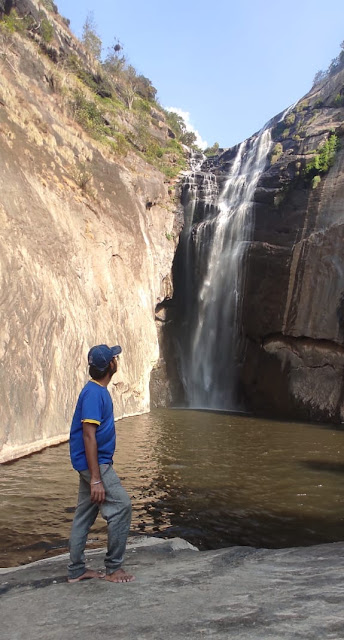 After the Yoga Ashram, I traveled toward Kodaikanal for my next volunteer stint. It was a remote village far away from the maddening crowd of the Touristic place i.e. Kodaikanal. I was volunteering at a hostel-cum-retreat where I was hosted by Mr. Know-it-all. Yep, the guy has an answer for everything and anything. The place has everything to make it self-sufficient i.e. river water, bio-gas set-up, food garden, solar electricity although nothing was fully functional or organized. At the place, I tried my hand at woodworking. I mainly worked in a Treehouse doing necessary repairs and renovation. One thing I realize is building something can be a really fulfilling experience. After the end of the day’s work, I used to go for a bath in a river nearby with birds chirping around. Easily, the best part of a day for me! Mornings and Nights were cold, a welcome change from the hot weather of Madurai. During my first night when I was sleeping, an animal entered the hut that scared the hell out of me. When I switched on the bulb, it turns out to be a cat. Rest of the days, the cat and I slept together haha. One day, we went for a long adventurous hike lasting for 9 hours. We literally climbed up and down almost 90 degrees. Clearly, Adventurous is an understatement. One of the craziest hikes of my life! At the end of the hike, we reached a massively stunning waterfall. If it was all worth it, I am not sure as the experience flings with the fine line between being adventurous and being stupid. I enjoyed my volunteer stint at the place and quite liked the place and its surroundings. If I had vibed with the guy, I would have stayed longer. Anyhow It was a learning experience for me. The most important lesson I learned from the place is “If You Never Try You’ll Never Know” 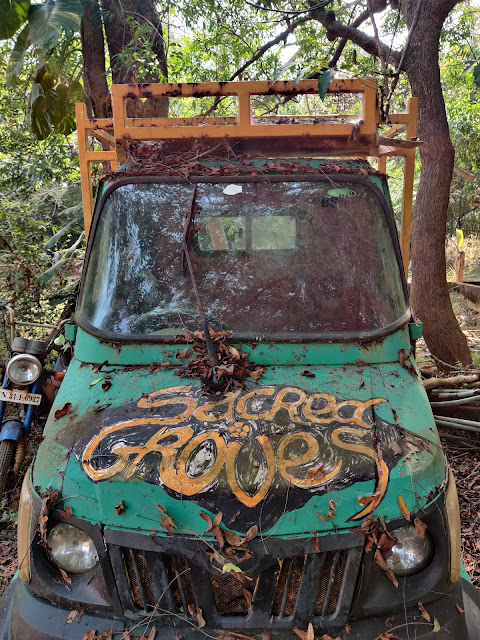 After exploring different parts of Tamil Nadu for a week or so, I reached Auroville near Pondicherry. This time, I found a place i.e. Sacred Groves, an Ecologically and Financially sustainable housing project. Working at the construction site was physically challenging but I learned a lot. We engaged in making Adode bricks, Cob wall, Earth wall, preparing and applying mud mortar and mud plastering, preparing lime plastering, demolishing a wall, and using the debris to build another wall. No or very limited use of cement. For example, for making Adobe bricks, we mixed Mud with M sand and for strength, we add coconut coir fiber. After preparing the mix, we shaped the bricks using mould and then left them under the sun for 3-4 days, and voila it’s ready to use! The working hours were 7 am to 4:30 pm. In the morning, we used to form a circle to do brief morning exercises as suggested by volunteers/interns followed by an allotment of work. Hot afternoons were challenging to work but once you get into the flow, you forget about the rest. Also, the afternoon cool mint lemon drink helped!  After work, we used to go for a swim in a nearby water body for a much-needed bath. I was staying in a dormitory at the site. During the initial days, I was the only one staying at the site. At night, I used to lie down in the garden under the twinkling stars in silence with no artificial light around. I miss those nights. It was my first time working at a construction site and I really liked the experience. I would love to volunteer and enhance my knowledge in this field in near future. If you wish to volunteer/intern at Sacred Groves, click here. 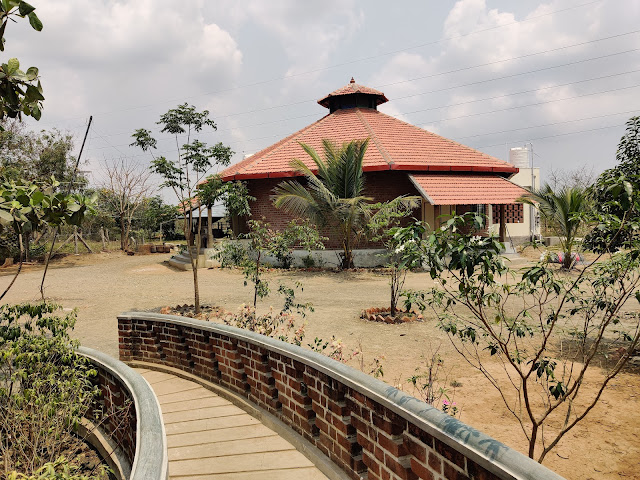 With a stroke of luck, I end up volunteering at Sristi Foundation. It lies 35 km away from Auroville. I was all set to travel towards Ooty but at the last moment, I received a message from its founder and I decided to change my travel plans. I am really glad that I did it as It was quite easily one of the most fulfilling volunteer experiences I have had! The foundation works towards empowering persons with intellectual disabilities. Since I like exploring different things, I worked with Students (persons with intellectual disabilities), and the Back office team, on a Vegetable farm, Dairy farm, Chicken farm, and Kitchen. I enjoyed every minute of it. There are around 40-45 residential students who live at Sristi Foundation and around 12-14 day-care students who attend Sristi Special School between 9.30 am to 4.30 pm. Residential students also follow the daily schedule that includes attending class, working at the designated farm (Dairy, Vegetable, or Chicken), dining hall, and kitchen. The day begins at 6 am with a morning exercise followed by morning tea. In the morning work, I used to harvest vegetables for a day’s food. Nutritious vegetarian meals provided at the foundation are based on the Farm-to-Table concept with the majority of raw food being sourced from the Sristi organic farm. Some days, I worked in the kitchen helping two awesome Akkas (Tamil word for “big sisters”). I learned the Tamil style of cooking. At the special school, we used to engage with students. The focus of the class is to change the behavioural patterns of the students and their sensory development. Hats off to the teachers as it can be a really mentally exhausting job. Working with students, I learned how to turn one’s disability into ability. It was such an enlightening and inspiring experience! The thing I really like about the foundation was its focus on making the residential members financially independent. In order to achieve that, they have appointed a placement officer who looks for suitable jobs outside the campus for the students who can live and work independently. From time to time counselling is required for placed students. Additionally, they are looking to set up a milk and ghee production unit in order to financially empower students who can work. If you like to contribute or volunteer at Sristi Foundation, click here.

4 Must Visit Places In Kerala