In my sixth post of Q & A Series with Locals, I interviewed Temsulong from Nagaland. Nagaland is one of the Northeastern States of India. During my solo trip to Northeast India, I met Temsulong during the Dzukou Valley trek in Nagaland. He was part of the college group I met in the guest house. Amazing bunch of people. He is really keen on solo traveling and aspires to travel solo extensively. Thanks a lot for being part of this series, Temsulong and all the best for your future endeavours!

Q & A WITH TEMSULONG FROM NAGALAND, INDIA

Please tell us about yourself.
My name is Temsulong Jamir and I am from the state of Nagaland in India (North East). I was born and raised in Mokokchung District in Nagaland but currently, I am mostly based in Dimapur. I am a student and have completed my Bachelor of Theology and by the end of this year, I will start my Master’s Degree.

How many Countries/States have you visited so far?
I have not done much travelling but have been able to visit some states and neighbouring countries, they are Bhutan, Myanmar, Manipur, Assam, a few regions of West Bengal including the beautiful city of Darjeeling and for now I am currently trying to travel and discover the places in my state to get to know my homeland better.

How would you describe people from Nagaland?
Nagaland is inhabited by 16 major tribes i.e. Angami, Ao, Chakhesang, Chang, Khiamniungan, Kachari, Kuki, Konyak, Lotha, Phom, Pochuryi, Rengma, Sangtam, Sumi, Yimchungru, Zeliang. Each tribe with their own language, cuisine, culture. I personally feel like the Naga people are a group of people who are very culture-oriented and their lives revolve around community life. The people of Nagaland take pride in their culture and their identity as a Naga. There is a deep sense of brotherhood and sisterhood among the Nagas. You can see diversity in our lifestyle and beliefs. So everyone is not the same but Nagas, in general, are very hospitable, open-minded and also very curious people. You’ll also find that the locals are quite shy people at first but once they open up they are very warm-hearted and helpful people.

How would you describe Nagaland?
Nagaland is a developing state and is very rich in flora and fauna. It’s a hilly region and it’s often a struggle for people who are not habituated to living in hilly places when they visit Nagaland. If one wants to find out more about Nagaland it is better to visit the state and travel around as there is not a much-written history about the Nagas and about the places because of the oral traditions that were practised. But efforts are being made these days to know more about the history of Nagaland. We will find many Historical sites and locations which are not written about as we travel through Nagaland. Apart from Dimapur which is quite hot, the weather of other districts in Nagaland is either cold or pleasant.

How well does people in Nagaland speak English on a scale to 1-10?
Every tribe has its own language like Ao, Angami, Lotha, Phom, Konyak, Sema etc. The people from different tribes use Nagamese which is somewhat broken Assamese, to converse among themselves. People don’t often speak English but there is quite a decent amount of people who do. I would rate it a 6.

How to say some key phrases in local languages?
As I mentioned earlier, each tribe has different spoken language but mostly people converse in Nagamese which is broken Assamese. I’m not sure if I’m getting the spellings right but here are some:

Which is the best/essential local food to try in Nagaland?
When it comes to food in Nagaland, it’s all about Pork! On every special occasion and events, the main dish is pork but each tribe has its own way of cooking it. Apart from that, every tribe has a unique food of its own like Axone(Soyabean) for the Sumi, Anishi for the Ao, Bambooshoot for the Lotha etc. There are also foods which some would consider extreme like a silkworm, certain insects, frogs, snails and many more. So I cannot specifically recommend you a particular food in Nagaland. One must come and explore them as they please 🙂

Which is the best/essential local drink to try in Nagaland?
There is a lot of local beverages procured by different fruits and each tribe also has their own unique ones but the most famous one and it can be found in every tribe is  Zutho (rice beer). It was served in almost all the festivals and family gatherings in the past. Although now it is not commonly used as before. Nonetheless, it is still quite well known. Secondly, Angh Khalep (black tea) commonly used especially among the Konyak tribes. It is locally produced and has a very unique essence of its own.

Which is the best/essential festival to attend in Nagaland?
Nagaland is known as a Land of Festivals with many different festivals of the major 16 tribes. One of the most famous festivals is Hornbill Festival where we can see different tribes performing their cultural dance on the tunes of their folk songs and also, there are other things like Marathon, Cycle rally, City tours, Kids carnival, Naga Wrestling, Hekko Exhibition Match, Various games/contests, crafts and art exhibitions. It is a must-visit festival which held every year in the first week of December in Kohima Kisama village. Apart from that, we can also witness the Sekrenyi festival of the Angami tribe, Aoleang festival of the Konyak tribe, Tokhu Emong festival of the  Lotha tribe, Tuluni festival of the Sumi tribe, Mong Mong festival of the Sangtam tribe and many more.

Which sport are people in Nagaland crazy about?
Many types of sports are encouraged and are represented in Nagaland and the interest varies but if we were to point one general sport then it has to be Football. We can witness a passion for football in every house and with several age groups. We can see people of different age groups playing football on the local grounds or roads. Apart from that, Naga wrestling is quite popular, especially among Angami tribe.

Which are the best cities/places to visit in Nagaland?
Almost all the districts have a unique site of its own and the more you explore a particular district in Nagaland the more interesting places you will find.  Some of the places I think are:

What are the landmarks and hidden gems of Nagaland?

Above places are not the only ones, there are several sites that even I haven’t visited or know about. The more you travel into the Land of the Nagas the more you will discover. In each district, In each village, there are some hidden gems waiting to get discovered.

Please share an Interesting trivia about Nagaland?
Firstly, Nagaland is one of the States in India where ILP is required to enter. Secondly, Nagaland is the Falcon Capital of the world. Thirdly, It is the home to the world’s hottest chilli(Ghost Chilli) and annual Chilli eating competition is held at the Hornbill festival. As I mentioned before, Longwa Village is a unique village which is divided between India and Myanmar. Lastly, Nagaland is one of the states in India with a Christian majority population.

What are the most popular stereotypes/cliches about Nagaland?
Nagaland has many folk tales, lores and legends. Headhunting was a prime practice back in days. Although the arrival of Christianity has transformed the Nagas tremendously to cope up with the contemporary world. But some people think that headhunting is still practised in Nagaland which is totally untrue. Animism was practised by our forefathers but some people think our ancestors follow Hinduism. Some people from Mainland India call us “chinkis” as they think we are from china because of our mongoloid features.

Are there any local customs a visitor should be sensitive to?
There are no local customs as such, especially for a guest/tourist but the Nagas from a very young age are taught how to speak, respect, behave in a certain manner. It is traditionally passed on.  One must act respectfully, especially towards the elders. It is not applicable to everyone but one must also respect the patriotic feelings of the Nagas as there is a lot of historical events in relation to the social and political aspects of the state. Apart from that, it differs among the different tribes and within the context of particular people. 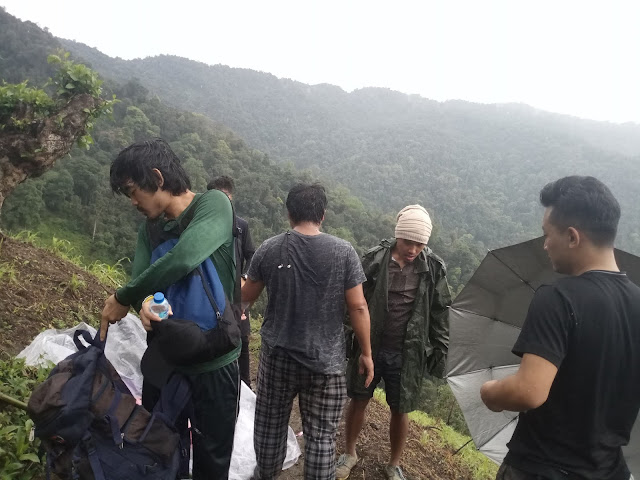 When I asked him to share an interesting picture of his. He chose the above one.
This picture was taken after a long trek of around 5 hours through the mountains close to India-Myanmar Border. We started off early in the morning and had to cross around the two mountains. The forest was so thick and there was no paved road. We had to walk with heavy rain pouring on us and we couldn’t able to stop to take some rest even though we really wanted to. We also had limited food and were really tired since we had walked for two days before this trek in a similar terrain through two villages and we were on our way to the third village. When we finally reached an open area, it stopped raining and we could rest for a while. We were overwhelmed with joy. We had to continue further on from this point for some more hours up and down the mountain to reach the third village. Additionally, we toured another two villages and came out through Longwa and headed back home. Seven of us took up this journey into the Myanmar side to witness the life of the people who were living in poverty and in such an ancestral lifestyle. We tried to uplift them with the Gospel. The people there have no access to modern technology or even basic needs. They are voiceless and cannot reach out to the world for help. It will be wonderful if people could reach out to them with any kind of help.