I was always fascinated by Russia. For me Russia is like a big mystery. Like Churchill once said “It is a riddle, wrapped in a mystery, inside an enigma.” Russians are always depict as villains in Hollywood films. I feel their humanist side when i saw films by Zvyagintsev and Tarkovsky. So, last year I got the chance to visit Moscow in transit and I grab the opportunity by deliberately booking a flight with a long layover in Moscow. I applied for transit visa at Russian consulate and received the same within a week. Here’s my account of how I spend 23 hrs in Moscow:

My Aeroflot flight landed at Sheremetyevo Airport at 10.30 PM. Immigration was bit lengthy. Immigration officer didn’t asked much questions but took her time to check the visa. She seems unsure about the visa and cross checked the same with her colleague. After good 15 mins she stamped and handover my passport with an immigration slip. I took the escalator down to the exit. Due to ongoing repair work Metro was not working at that time. I book an Uber to my hostel. For some reason that ride is still etched in my memory. It was 45-50 mins long ride. I was looking at Moscow skyline, leafless trees, extreme wide roads, vehicles while listening to some kind of weird techno Russian music playing in the car. It was cold and gloomy.

I reached my hostel. It’s near to Kremlin. I planned to explore the nearby area but was really tired to do so. I just check-in and slept like a baby.

Next day, I check-out early and explored the nearby area. As suggested by hostel staff I visited a bank named Fora Bank but they were offering terrible exchange rate for INR. Luckily, I had some euros left. I got good exchange rate for euros.

After exchanging the currency, I head towards the meeting point of free walking tour. I entered the metro station and got lost in wonderland. It was like walking in a labyrinth where it seems nobody speaks English and everything is written/spoken (sign boards to station names to announcements) in a form of which i was unable make out any head or tail. I board the wrong train and reached “i don’t know where.” I saw a policeman and approached him to ask for directions. He asked “pass” and I showed him my ticket but he kept saying “pass” “pass” “pass” until he said the complete word “passport”. I showed him the same. He examines my visa and give it back to me and tells me to use an escalator and go up.  In my mind I was thinking “what if I left my passport at the hostel?”. I did the same but his instructions were quite vague. I approached a young girl who luckily speaks good English. She told me to follow her. She takes me through few escalators, stairs, platforms till we reached the right platform. Then she gave me clear instructions about how to reach my destination. She saved the day, literally! After that policeman episode I was feeling bit intimidated but she completely changed my thoughts. Thank you, unknown stranger! 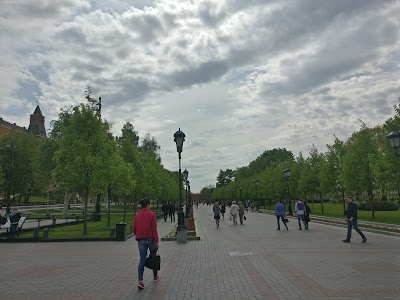 I reached the meeting point of Moscow Free Tour. I met an Indonesian girl in the group who too were transiting through Moscow. Like me she was intrigued by Russia and deliberately choose the long layover flight. What a coincidence! I did free walking tours in the past too and like my friend once said “you will always find an Indian in free walking tours” and he was right till now but i was not expecting any Indians this time. But was glad to be proven wrong. I met a family from Kolkata who too were pleasantly surprised like me. We met our tour guide Maria. She is an articulate, compassionate person and really passionate about her job.
It was 2 hrs 30 mins long tour and we visited through places i.e. Varvarka Street, St Basil Catherdal, Lenin’s Mausoleum, Senate Palace, GUM, Red Square, Alexander Garden, Kremlin. The problem with free tours are they are being rushed but this was not the scenario with Maria. Since i was fascinated by Metro stations and liked their free walking tour, i booked a paid Metro tour with them.

During my short break I had a lunch at My-My restaurant  near Kremlin. They have a buffet system and i was starving. I filled my plate with whatever i get my hands on. 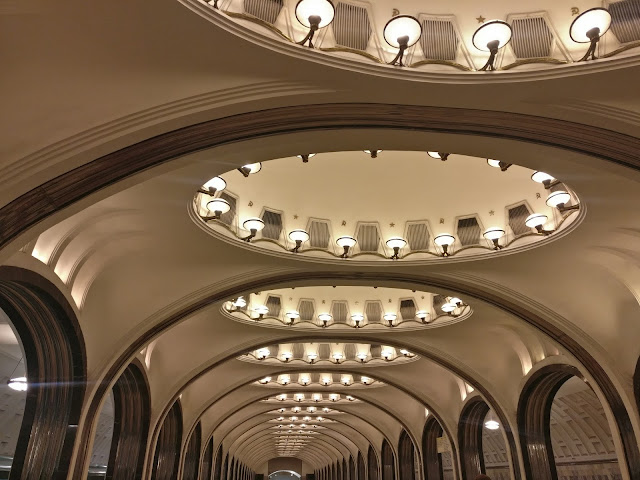 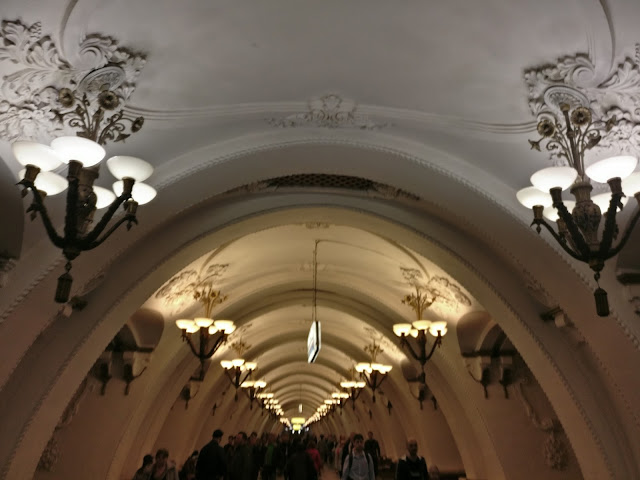 We commence our Moscow metro tour. We went to many metro stations and every station has so much history and their unique charm. Efficient, Cheap, Deep escalators, Underground network, Beautiful structures, Old world charm, Vintage trains, Classical music playing (As per our tour guide, not everyone can play at metro stations, they get shortlisted based upon their talent). My best experience in Moscow!

I bid our tour guide adieu and went to explore Kremlin. Inside Kremlin i enjoyed my visit to cathedrals, beautiful garden, had a nice walk and it had a great view of the city. Outside Kremlin, The Tomb of the Unknown Soldier is located where i saw ceremony of changing of Guards. It was goosebumps inducing experience.

I left Kremlin to do one of my favorite things. Whenever i visit any unknown city i always walk aimlessly there to explore. So i begin my unknown journey by crossing bridge above Moscow canal. I walk for more than an hour not knowing where to go. I walked close to the canal navigating through touristic areas to normal neighborhoods and had a mandatory vodka shot!

After my metro tour I was looking forward to use the metro! In my solo expedition I stumbled upon a metro station and board the train to belorussky rail terminal. From there I catch the train to airport. Smooth! I was bit anxious since I was running late but then I met an Iranian guy on train who had an earlier flight than me and I weirdly felt some sort of relief. It was approx 45 mins ride. I saw Ostankino tower , some old buildings, vast greenery during my ride. After reaching airport, Iranian guy bid me adieu and ran like a bullet. I too hurry up my steps. I reached the immigration counter. This time too they take their time, telephoned someone, gone through the visa again and again but didn’t asked any questions. Even security check took some time and was bit intimidating. I kept looking at my watch. I finally reached my gate when they were boarding the last batch. I was the last person to board the plane! 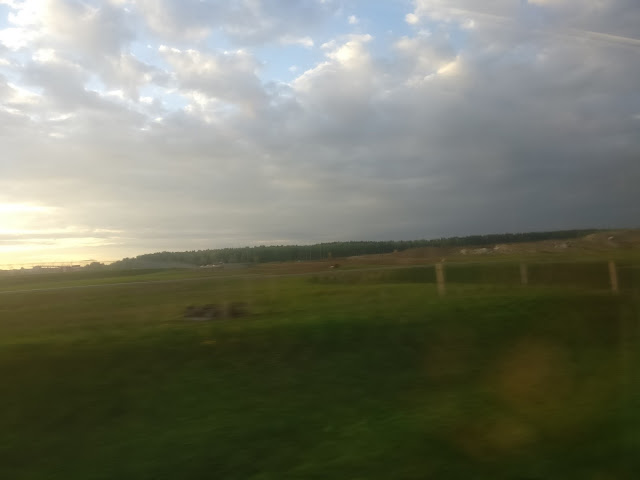 Our plane took off and i thought about that Iranian guy “Hopefully, he too have managed to board his plane!.” I reflect upon my time in Moscow and Churchill’s quote crosses my mind.

If you have any questions, write them in the comments. I will answer them accordingly.