After Rwanda and Uganda, I traveled to Kenya during my 2 months long East African Trip. I was on the last leg of my trip and still have not done an African Safari. I skipped the safaris in Rwanda and Uganda cause I wanted to do the best safari in East Africa i.e. Masai Mara Safari. The BIG 5 game animals of Africa i.e. Lion, Leopard, Rhinoceros, Elephant and Cape Buffalo are found here. Before my trip to Masai Mara Safari, I had little interest in animals but after the trip, I can’t wait to visit National Parks in my own country INDIA! Masai Mara Safari is consists of 3 days and 2 nights. Food, accommodation, transportation, a guide was included in a package. I always avoid taking a package but I got a great deal thanks to Malvic tours and travels. They customise a package as per the customer’s budget/requirement. The best part is they also host people via Couchsurfing. 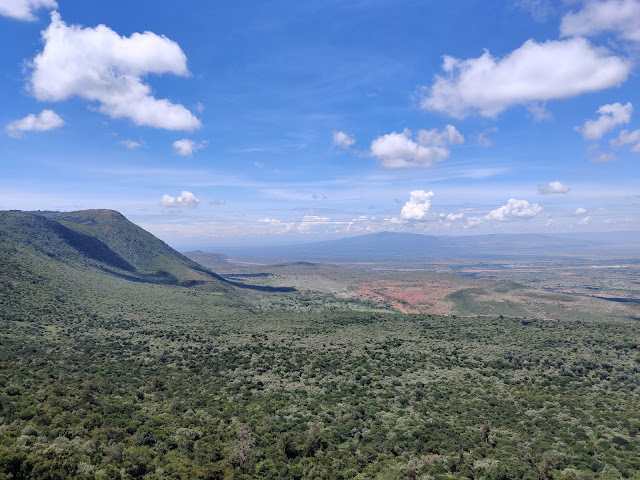 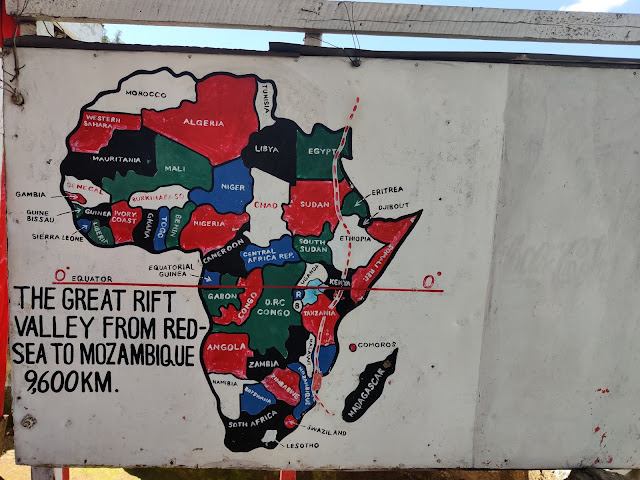 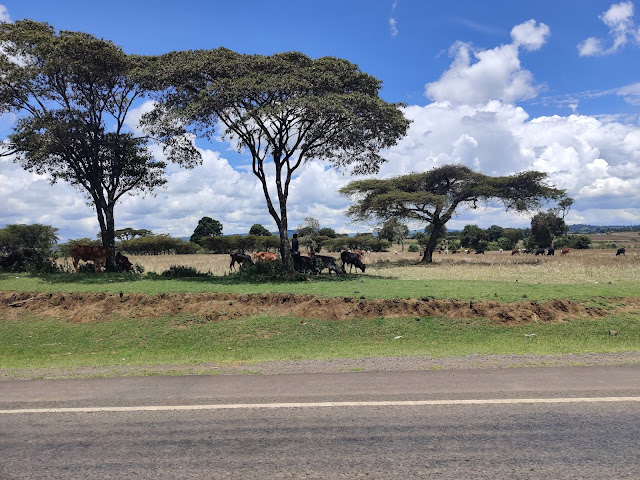 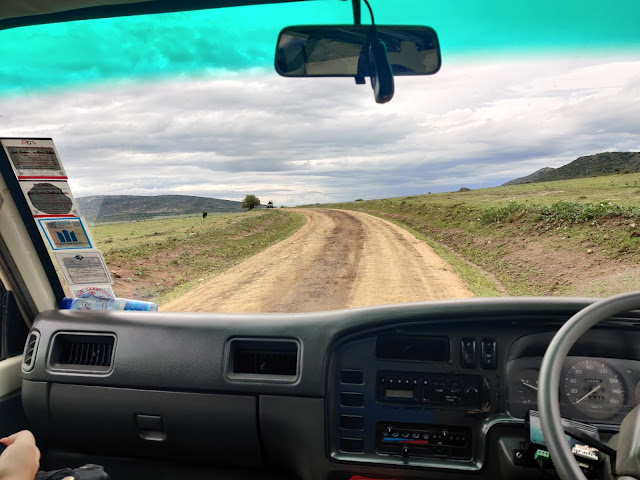 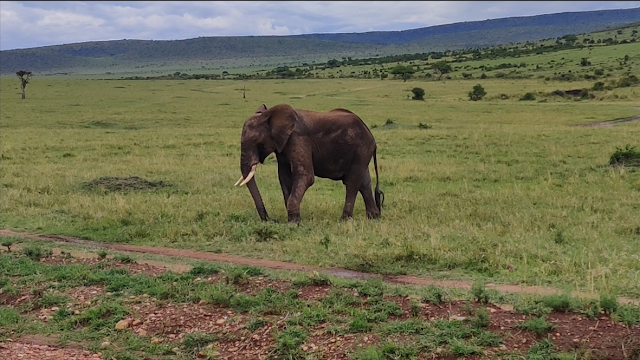 The safari starts from Nairobi. I reached the city centre in the early morning to board the vehicle. It was an Eight-seater Van with a provision of open roof. We were 8 people apart from our driver cum guide which consists of A German lady, An Indian family of 3, A Russian guy, Two French ladies and yours truly. The journey to reach our destination was approx. 8 hours long. Our first stop was to view the Great Rift Valley. It is a series of contiguous geographic trenches that runs from the Red Sea to Mozambique covering 9600 Km. Breathtaking view! We also stopped in between for lunch. The journey to Masai Mara is full of picturesque views. We reached our lodge around 4 pm and hurriedly left our luggage at the lodge before heading to the Masai Mara National Reserve/Park. After completing the entry formalities, we checked into the Park. The first animal we saw was the Wildebeest followed by Gazelles, Antelopes, elephants and the Lion! Watching Lion walking into a sunset was the highlight of my Masai Mara trip. Truly cinematic! You can watch the whole video here. The moment reminds me of “The Lion King”. After the 2 hours long safari we returned to our lodge to get a much-needed rest. For the next day, we were given a choice to either start late and do 2 more hrs safari on Day 3 OR start early tomorrow and visit Maasai village on Day 3. Majority chose the latter option. I was given a safari tent with 2 beds inside. Since I was alone and it was not the high season, I got the whole place to myself! After the dinner, I was fast asleep and tomorrow will be the full fledged safari day lasting for approx. 11 hours! 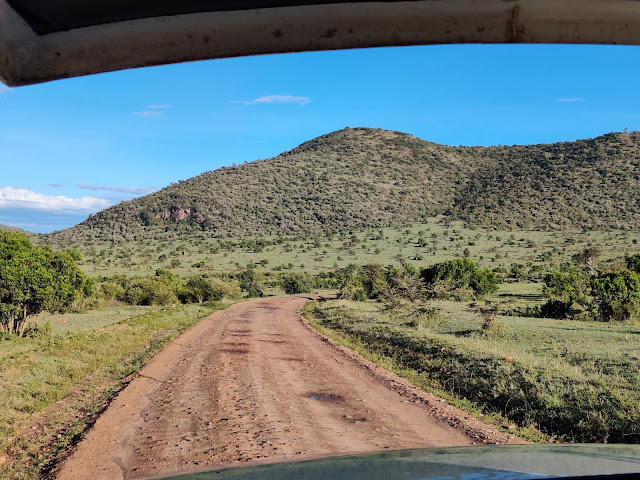 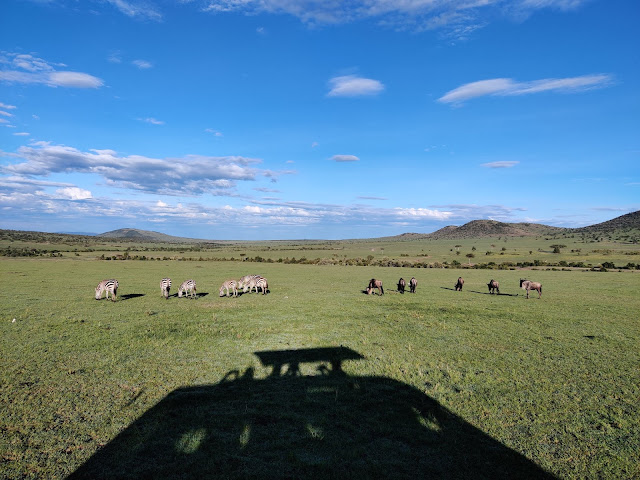 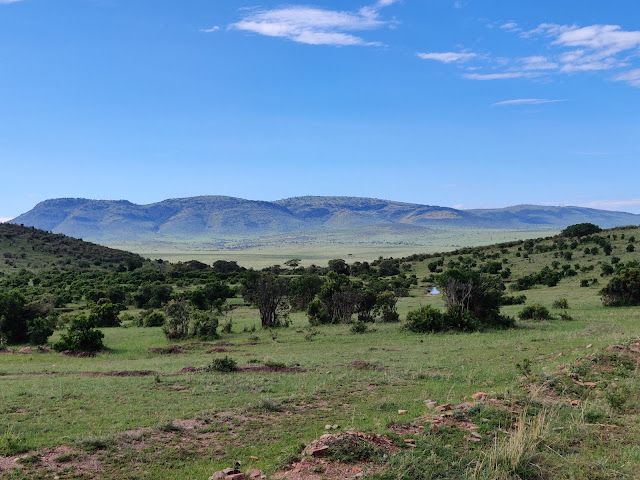 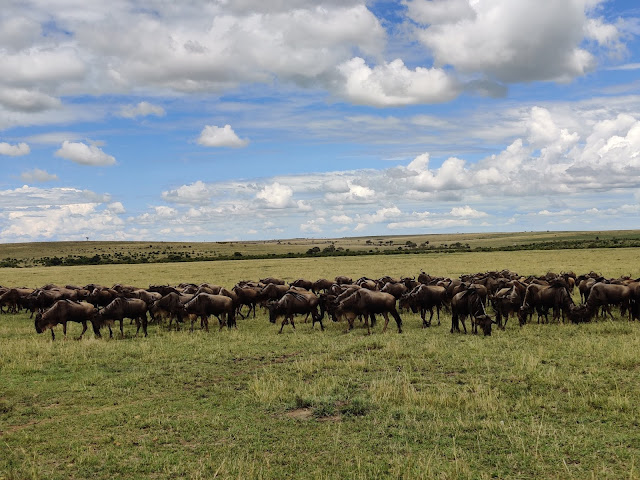 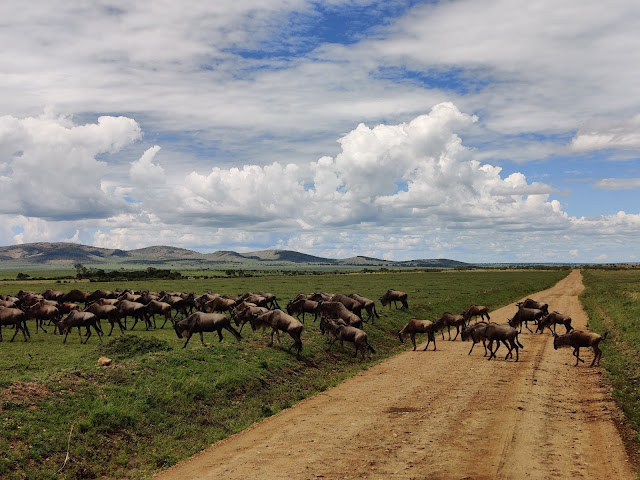 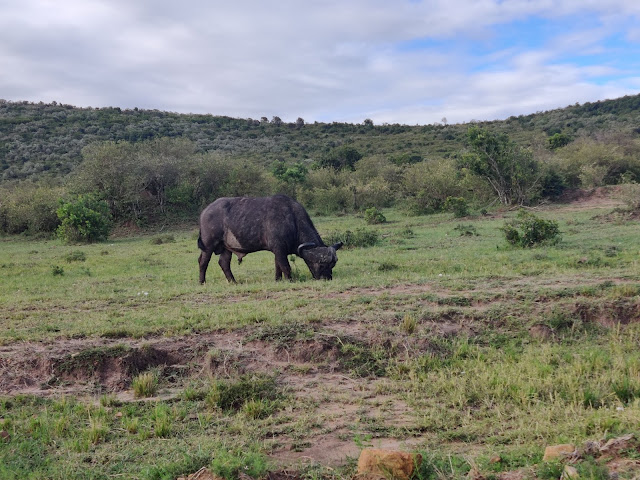 We were set off for the safari at around 6 AM. I was half asleep before entering the Park but as we entered the park and the moment I saw the first animal (even though it was a quite common Wildebeest), I was wide awake. Wildebeest was running at high speed to cross the road and our vehicle stopped to let them pass. It was a thrilling spectacle. Followed by the usual suspects i.e. Gazelles, Antelopes, Zebras, Elephants. And then, we saw Giraffes, Hartebeests, Topi, Cape Buffalos, Hyena and the Lion. We saw a Giraffe running to cross the road. The running which can be only described as an awkward walk due to its long legs. I saw the king of the jungle resting on a rock. Our driver took the Van way too close to the Lion. To be honest, I was a bit scared. We were in the eye contact range of the Lion but he was undisturbed by our presence and completely ignored us hahah. We saw many vans were heading in the opposite direction. So our driver followed them and it turns out it was all for the two sleeping lionesses. Again, they were undisturbed by our presence and pay no heed to us whatsoever! One Lioness did yawn after some time and then go back to sleep again. After watching them sleeping for 15-20 minutes, our patience ran out. Since we have seen the Big 3(Lion, Cape Buffalo, Elephant) out of Big 5 game animals, we pushed our driver cum guide to track Rhinoceros and Leopard. He said seeing Rhinos is quite rare as there are less than 50 rhinos in Masai Mara. We did not see the Leopard but we did see his prey lying on a tree. We also witnessed a herd of wildebeest returning back to Serengeti National Park in Tanzania. We chased them fo a while before heading to Mara river. The Great Migration happened between July to September when hundreds of thousands of Wildebeest and Zebra migrate from Serengeti National Park, Tanzania to Masai Mara, Kenya in search of good grazing. It is the peak season of Masai Mara Safari. After half an hour drive we reached the Mara river and as we reached there, rain gods welcomed us. So we took the lunch break in our van. After the lunch and rain break, we ventured out to take a walk close to Mara river. We saw Hippos and Crocodiles in Mara river. We were accompanied by a Ranger who gave us a few insights about Hippos and Crocodiles. He told us Hippos come out of the river during evening at a specific time every day. Crocodiles remain still as a rock with their mouth open as if they were a statue not real. This is a ploy to attract their prey and kill them subsequently. At the end of our Mara River tour, it starts to drizzle again. We head to the unofficial Tanzania- Kenya Border. I crossed over to Tanzania without visa or immigration 😉 Our guide informed us the Tanzanian immigration point is nearby and one can enter Tanzania from there by availing visa-on-arrival facility. We were at the end of our safari when the French lady pointed us towards a scenario that could be a prospective hunt.  So, we saw a gazelle eating grass and minding his own business. Not so far from Gazelle, we saw a Lioness sitting behind a bush. Gazelle was aware of Lioness as he keeps looking in Lioness’ direction. A warthog joins the Gazelle and shortly after we saw a Lion coming in the direction of Gazelle and Warthog. The lion was not running just walking at a normal pace. Now, this gets our massive attention. Even our guide got excited and was looking at the situation with great interest. Gazelle and Warthog were simultaneously looking at Lioness and Lion. At one point Lion stops and so does our heart for a second. We thought, he is going to attack but no that didn’t happen. Warthog moves in the opposite direction and so does the lion and so does our Vehicle shortly after.  With that our safari comes to an end. We exit the Masai Mara around 5 pm. While exploring Masai Mara, you never know which animal is around the corner. It was a wild, wild adventure. There is something irresistible about seeing the wild animals in their natural habitat. It was surreal and Goosebumps inducing experience! It is too hard to articulate in words. It is something which needs to be experienced.

On Day 3, we returned to Nairobi. We had an option to visit the nearby village to see the lives and culture of Maasai People for an entry fee. Maasai people are semi-nomadic people known for their distinctive customs and culture. Popularly known for their vertically high jumping dance. They are considered very strong and lion hunting was quite common among Maasai people in old times. I chose to wander around the nearby market where I spoke with some Maasai people. They came across as polite and hospitable bunch. We reached Nairobi around evening and bid each other goodbye.

Masai Mara National Reserve is a wildlife heaven. The Masai Mara safari is Once in a lifetime experience and should not be missed if/when traveling to Kenya. It was quite easily one of the best experiences from my solo trip to East Africa!

How I Did The African Safari For Free In Uganda: My Successful & Unsuccessful Attempt