During my solo travels, I had my fair share of misadventures. Some were brave, exciting, surreal or stupid. This is the account of one of those misadventures. I have to put a disclaimer here: Do Not Try This!

I was the only person crossing the border due to some ongoing dispute between Rwanda and Uganda at that time. I was checked for fever (see Ebola) before immigration. Immigration was smoothly done and the Lady at the immigration smiled and said: “Welcome To Uganda”.  I used the Cyanika Border to enter Uganda from Rwanda. I took a Matatu (Sharing minibus) from Musanze to reach the border checkpoint. It was an hour ride. My first destination was Lake Bunyonyi in Uganda. I took a mototaxi to reach Kisoro Town and from Kisoro a sharing taxi to reach Kabale. In Kabale, I found a supermarket run by Indians and bought a couple of Indian ready-to-eat meals since I was going to stay on an Island for a couple of days. I contacted my host Josh who gave directions on how to reach his place from Kabale. I took a Mototaxi to reach the Kabale pier. The way to the pier was a roller coaster ride on the road. 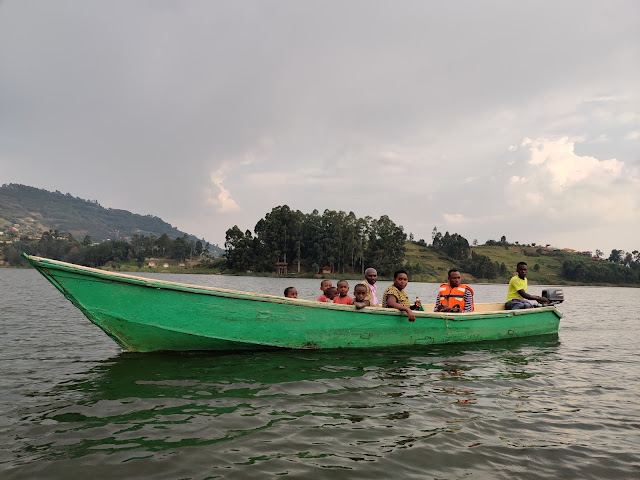 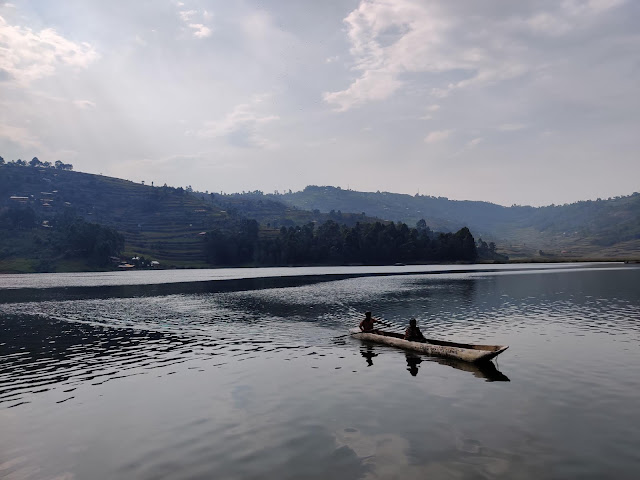 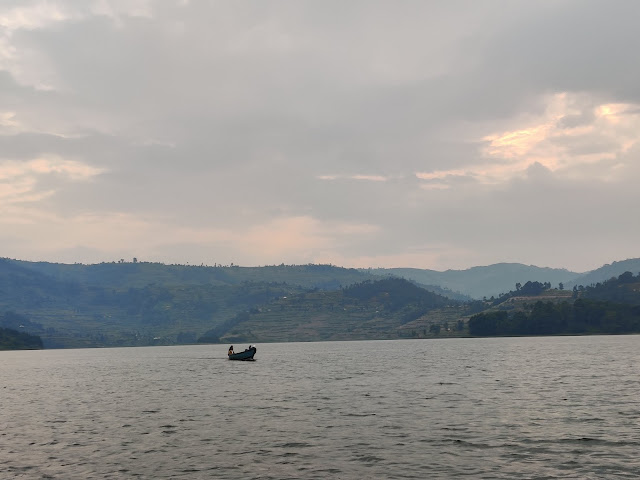 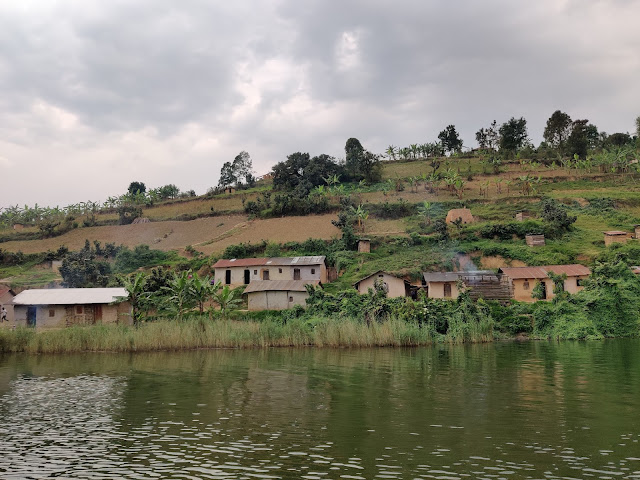 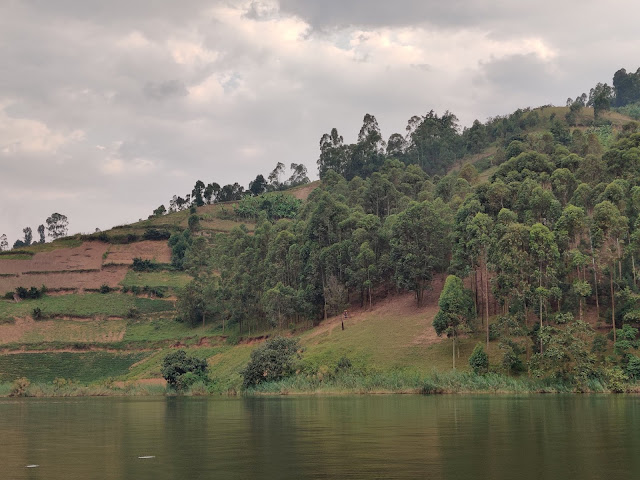 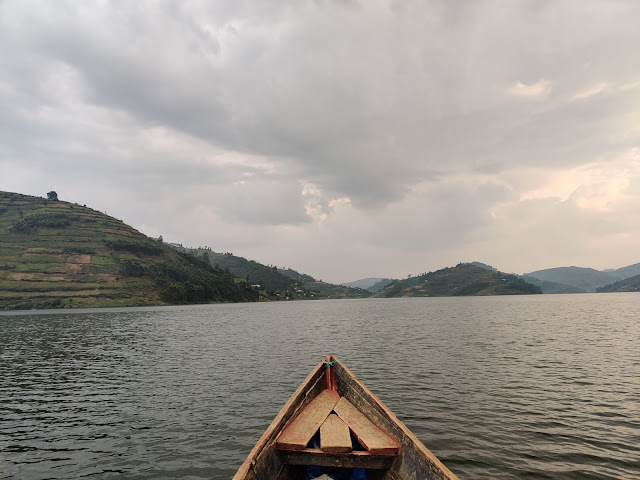 After Rwanda, I traveled to Uganda during my solo trip to East Africa last year. I met my host Josh’s brother-In-Law at the Pier. From there we traveled to Josh’s place via Boat. It was more than an hour-long ride but full of picturesque views. I saw many islands during my journey. Islands with hospital, resort, colonies, homes. Lake Bunyonyi is a freshwater lake. Maximum length is 5 km, Maximum Width is 7 km with Surface area of 46 sq km. You can find the national bird of Uganda here i.e. Crested Crane. The bird can be seen on the Flag of Uganda. 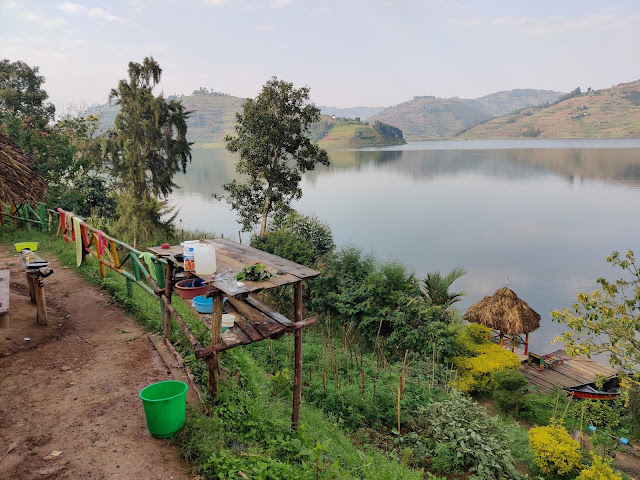 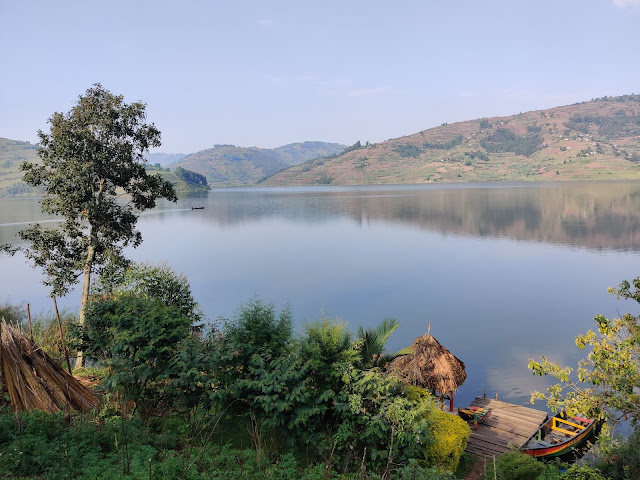 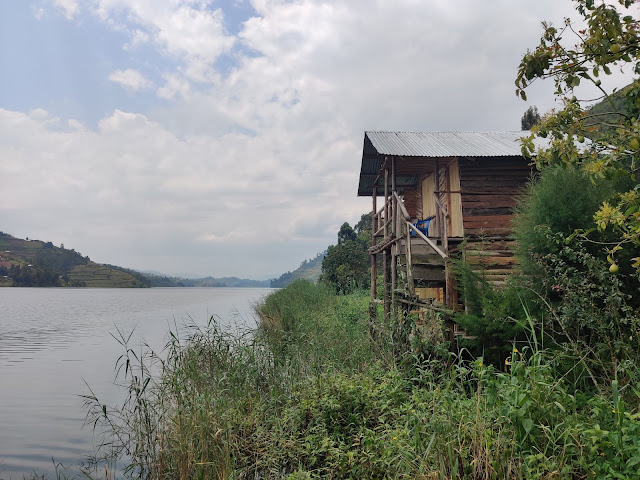 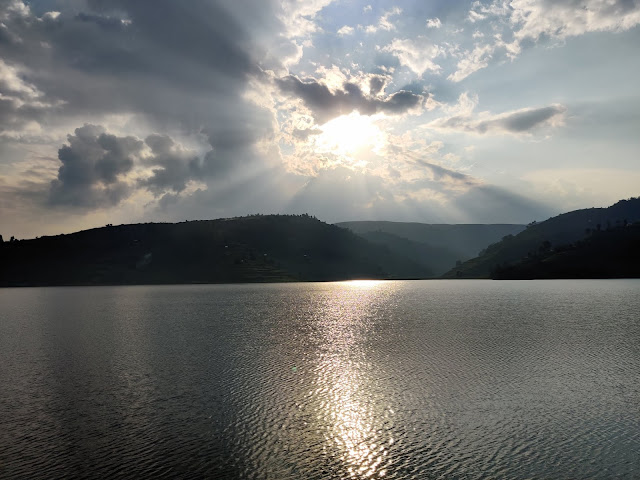 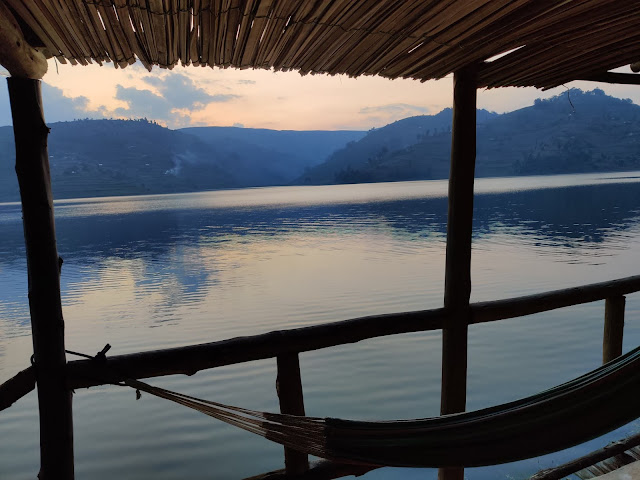 I was graciously received by Josh. I cooked my Ready-to-eat Indian meal and we ate together. He loved it!  The view from my room was simply majestic. At night, I could clearly hear the music that’s being played on the opposite neighbouring Island. The moonlight looks truly magical in the night. I slept on the hammock outside my room under the twinkling stars instead of the bed. Next morning, I met Josh’s European girlfriend. She is a tactless and self-obsessed person. The thing I really like about solo traveling is I meet so many people during my journey. Some I like and some I don’t like. I can always choose to ignore the people I don’t like and move on. Josh, on the other hand, is a really helpful and thoughtful person. He gave me his Canoe and the (mis)adventure ensues. He taught me for a few minutes how to do canoeing. He made it look so easy. I decided to embark upon on my solo adventure with me and my canoe. I was enjoying canoeing and in no time reached kinda far from our island. So I was on the narrow and not-so-strong canoe in the middle of one of the deepest lakes in the world by myself. I was really engrossed in my little adventure and loving every minute of it. After some time, I decided to go back and as I expected the more I try to go towards the Island, the more I drift away from it. So I decided to not do anything and wait for Josh to be in my sight and ask for help. And I left my phone in the Cabin! While waiting, I literally slept on the boat for like 15-20 mins. When I wake up, I drifted even farther away from the Island but it was still visible from my position. I don’t know why but I still did not felt any fear, maybe because of the adrenaline rush or maybe because I knew once I see Josh, he will come and take me back to the Island. Maybe my hope was so strong that it did not let the fear to take over me. After a few minutes, I saw Josh and did all the actions which a person can do in my position to attract someone’s attention. At first, he was giving me Thumbs-up as in ” Cool buddy, Enjoy!” and I was “DUDE, Come and f..king TAKE ME BACK! Thankfully, He understood and suddenly his actions changed to “Oh I’m sorry man, Stay right there, I am coming to get you” and I was like “Well, I’m not touching the paddle as it is beyond my competence to take control of this thing”. He came down running to the shore and tried to start his engine boat but could not due to lack of oil. He again went back to his house while trying to make me comfortable with his actions. It starts to drizzle by then. I was like “Okay dude, take your time but PLEASE hurry up!” Shortly after, he came back with oil and tried to start the engine and hallelujah it worked! Seeing him coming towards my direction, he was like a God to me at that moment. I felt like God has come down on the earth to save his most precious child. The rain was getting stronger. Finally, he reached and I quickly come on to the Engine boat. I was thanking him profusely and he was apologising simultaneously but luckily, we were on the same page about going back to the Island! He was driving the boat and I was towing the canoe. And it starts pouring! We both looked like someone who is coming from some cool lake expedition but only that we were not. After reaching the Island, Josh offered me to teach Canoeing later today. I told him that’s enough for the day. I would like to be on land for “at least” the rest of the day. His girlfriend was littering ROFL while listening to the whole episode. Well, someone wise has said that Comedy is nothing but someone’s tragedy. I enjoyed the rest of the day chilling on the Island while listening to birds, looking at the picturesque views, cooking and just being in that moment. The place is so peaceful that you forgot all about your worries and feel full of contentment. At night, it rained heavily and I was thinking “Thank God, I am not in the middle of the Lake now!” 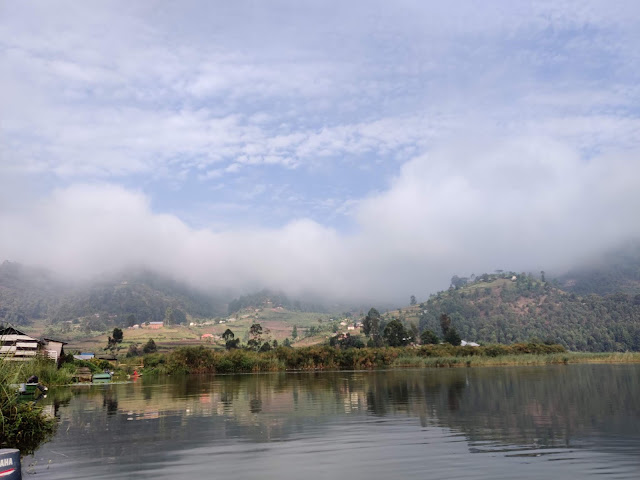 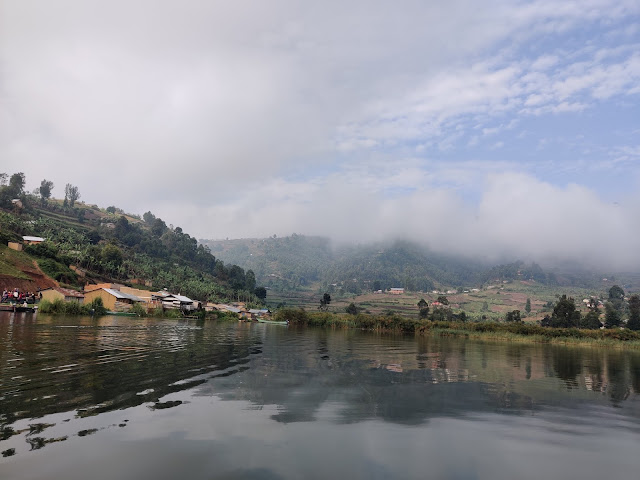 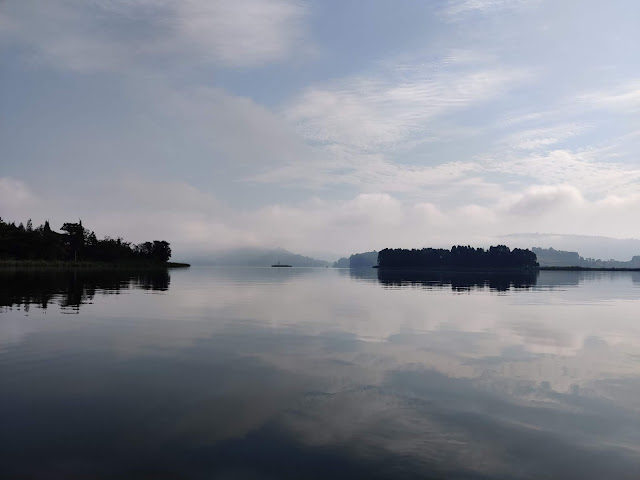 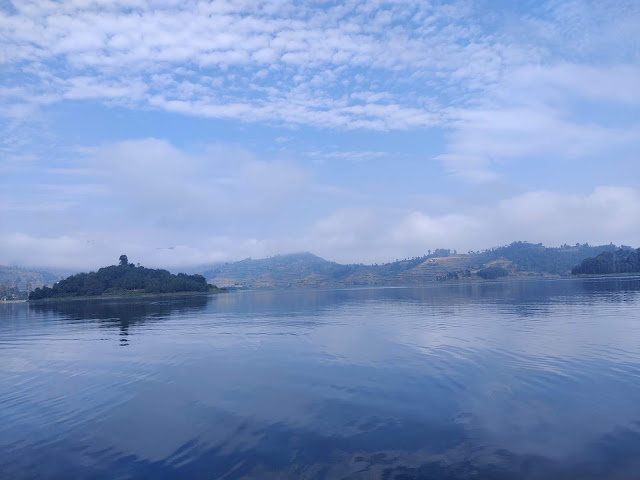 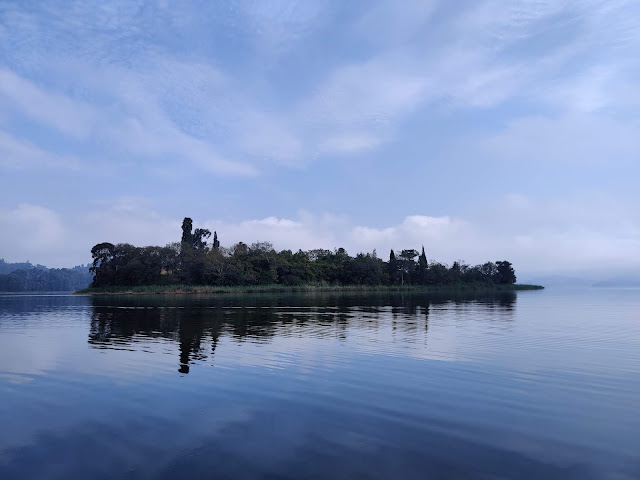 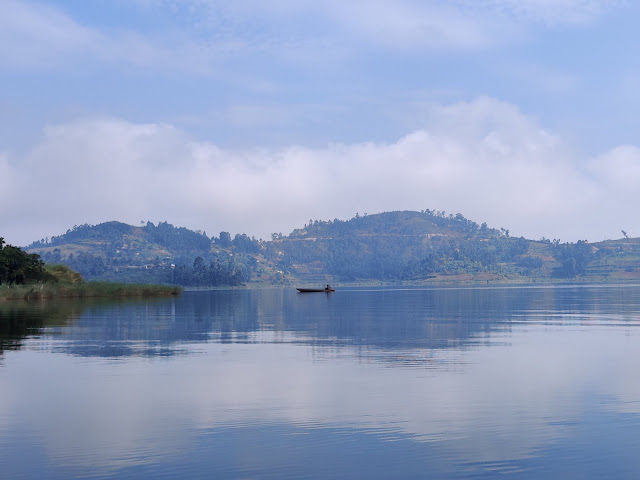 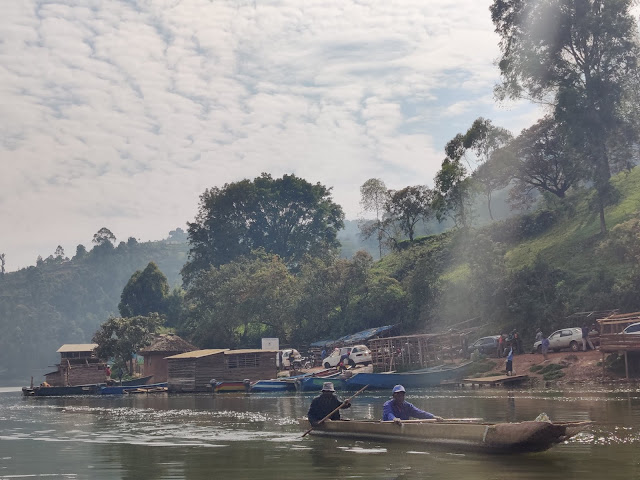 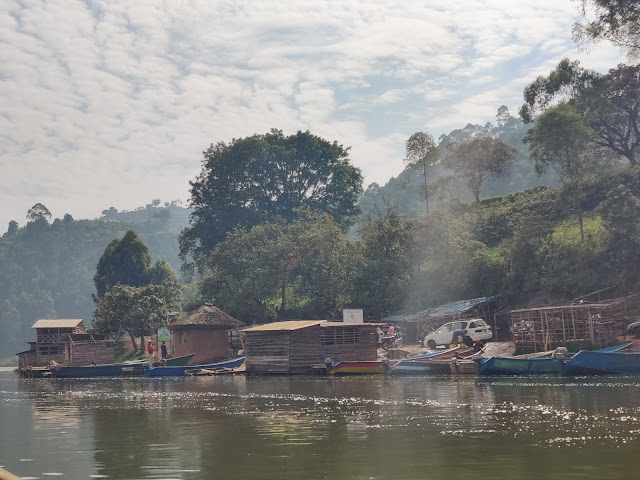 Next day, I bid Josh goodbye and took a boat back to the mainland. During the journey, I told Josh’s brother-In-law about the whole canoe episode. He was like “WOW, You are crazy man, You don’t even know how to swim and canoe and still went by yourself in the second deepest lake in Africa”. Well, then it hit me, I did something really stupid. This was one of the misadventures from my solo travels.

If you would like to stay at Josh’s place. You can book his place via Airbnb.

How I Did The African Safari For Free In Uganda: My Successful & Unsuccessful Attempt