KYRGYZSTAN is Switzerland of Central Asia as they say but after my visit to Kyrgyzstan, I would say Switzerland is Kyrgyzstan of Europe. I planned my Central Asia trip solely because of Kyrgyzstan but added Uzbekistan and Kazakhstan as I go along. My trip to Kyrgyzstan was full of surprises. I had many first time experiences in Kyrgyzstan such as First time land border crossing, Staying with a local family in a Village, My first trek, My First Hitchhiking experience, Celebrated my birthday outside India for the first time. Kyrgyzstan is a hidden gem. You should visit the place as soon as possible before it gets flocked with tourists. 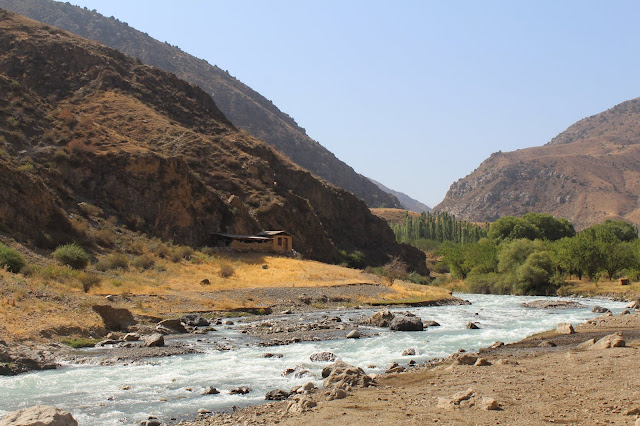 MY JOURNEY IN KYRGYZSTAN

MY STAY WITH A LOCAL FAMILY IN A KYRGYZ VILLAGE

I spend 2 nights with a local family in a Kyrgyz Village. It was my second Couchsurfing experience after Uzbekistan. After crossing the land border from Uzbekistan, I catch a taxi to reach my Host’s Village i.e. Borbash in Kyrgyzstan. I was his first guest from India and he was really happy about this fact. When I entered his home, I saw Bollywood songs playing on his TV. He smiled and acknowledged the same. The first word that came out of his aged father upon seeing me was “Raj Kapoor” (Legendary Indian Actor/Filmmaker)! My host understands little English but really keen to learn it. He pampered me with delicious Kyrgyz food, culture and hospitality. We went exploring nearby mountains, villages and had authentic local food. I also played snooker with his brother which I clearing sucked at! The two nights I spend with my host and his family was truly memorable. My host is married with three children. Their smiles are still engraved in my mind. Kyrgyz hospitality is nothing short of Indian hospitality. My host and his brother run a bakery from home and supply the goods to the nearby city. My host dreams of opening a guesthouse one day. It was easily the best experience of my trip to Kyrgyzstan. 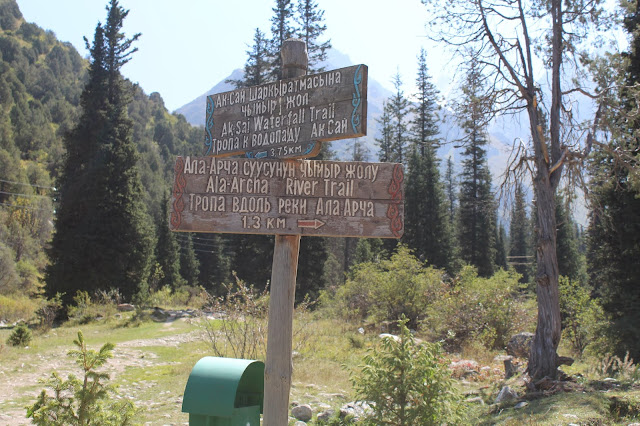 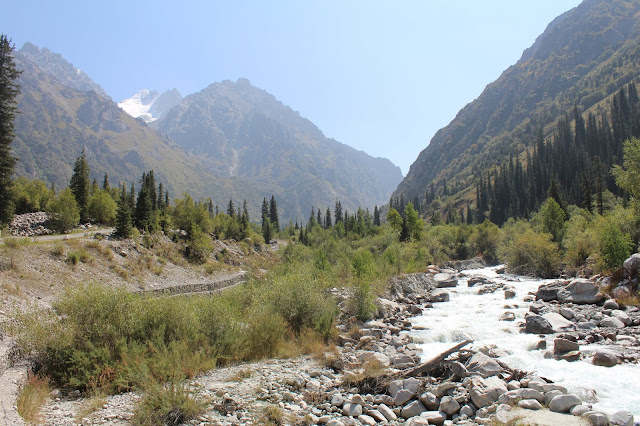 ALA ARCHA NATIONAL PARK- MY FAILED ATTEMPT AT TREKKING

Ala Archa National Park is located 40 Kms away from Bishkek City. The cheapest way to reach the park is by catching a shared Marshrutka(Mini bus) from Osh Bazaar, Bishkek. It takes more than an hour to reach the entry point of the park. From the entry point, one needs to catch a taxi to reach the main gate of the park. For solo travelers, it can be expensive. Luckily, I met two French guys and we shared a taxi to the main gate. The ride was 10-15 mins long. There are many things to do in the park. Check the map above. I decided to trek to the waterfall in the mountains with French guys. It was the first trek of my life but an unsuccessful one. French guys were too fast and I couldn’t keep up and left alone. I tried to continue on my own but soon gave up. Now, when I think of it I could have easily done it but maybe it was the first time hitch which stopped me. The view to the point I trekked was absolutely stunning. After I get down, I followed the river trail to the view of beautiful mountains. Due to time constraint, I can’t able to explore the rest of the park but it is definitely a must visit. 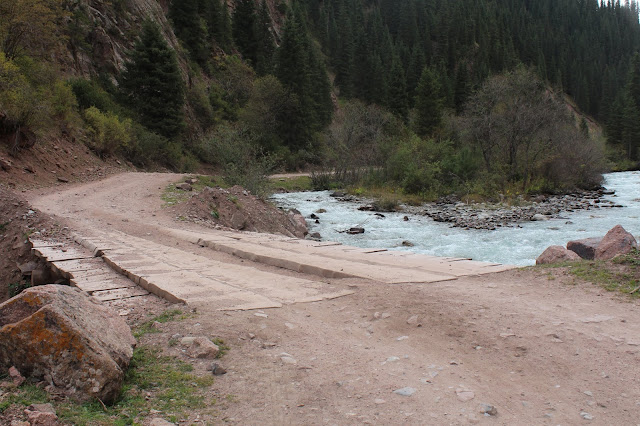 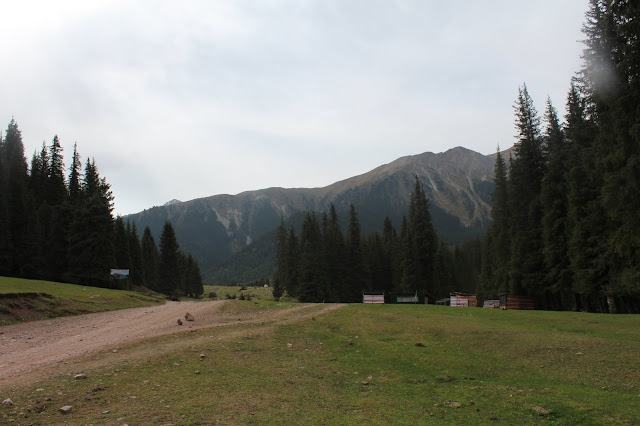 FINALLY, I DID MY FIRST COMPLETE TREK

After Bishkek, I traveled to Karakol. It was approx. 6 Hrs journey. Karakol is most popular for trekking and for the same reason I traveled there. After my previous unsuccessful attempt, I pushed myself to give it one more try and the result was truly memorable. I decided to trek in Jeti Oguz. The trek starts from Jeti Oguz(Seven Bulls) rocks formation. I set my aim to reach the waterfall located somewhere inside the mountains. It was a plain and dusty road for a while. After crossing 4 bridges, I reached the mesmerising view of the mountains. Here people are living in Yurts (Traditional Kyrgyz house). After I crossed the 5th bridge, I took the right turn in search of the waterfall. After more than an hour, I finally found the waterfall. It was a magical feeling. I did my lunch on the top of the mountain with a dreamy view: Lush green mountains, Beautiful yurts, Cool breeze, clear sky. I never wanted to leave this place. After spending precious half an hour, I started my descent. I plugged in my earphones and complete the journey while singing the Hindi lyrics alongside. Foreigners look at me with utmost attention while a local identified a song and sing along! It was approx. 5 hrs trek for me. No fees for trekking. One can also hire a ride to reach the bottom of the mountains and then hire a horse to ride into the mountains to reach the waterfall but if you can, I would highly recommend to ditch both modes of transport. With my first ever trek, I was bitten by the trekking bug and subsequently mounted the highest peak in Maharashtra once I got back home. 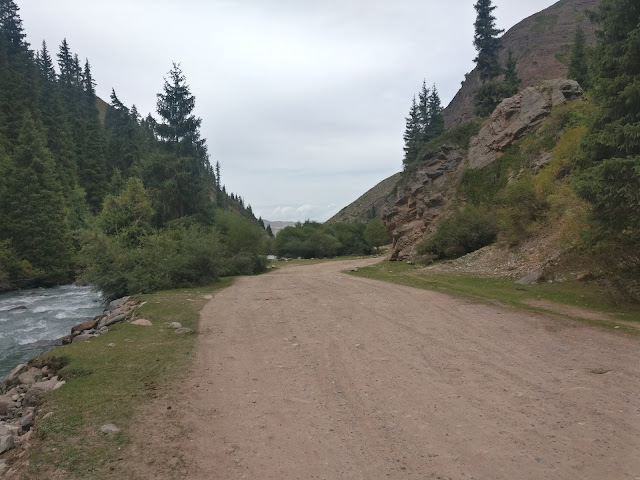 I was always amazed by the people who travel around the world by doing Hitchhiking. I just can’t bring myself to do it. Before this trip, I have made my mind that I will do Hitchhiking at least once anyhow. More than half of my trip was over, only a week was left in my trip. I did not get an opportunity to tried my hand at hitchhiking. Finally, the day has come! I was warned by the hostel peeps that I won’t able to find any taxi or worse, no modes of transportation from Jeti Oguz in the evening. So, they suggested to hire a taxi for a round trip but I had made my mind. I hired a taxi only for one way and Let it go! After being done with the trek, I was exhausted. It was close to 6.00 P.M. I reached the spot of taxis but as expected found nothing. From that spot, the main road was around 15 kilometres away. This stretch is particularly difficult to cover. Upon seeing no vehicles, I started my descend towards the main road. I covered more than 1 km with no sign of vehicles. Finally, I saw an old couple sitting near a lake whom I met at the waterfall. I approached them and luckily they had an empty seat in the car. Instead of the main road, I got the ride all the way to Karakol! Well, no thumb were involved to get this ride but I’m sure it can be considered a legit hitchhiking 🙂 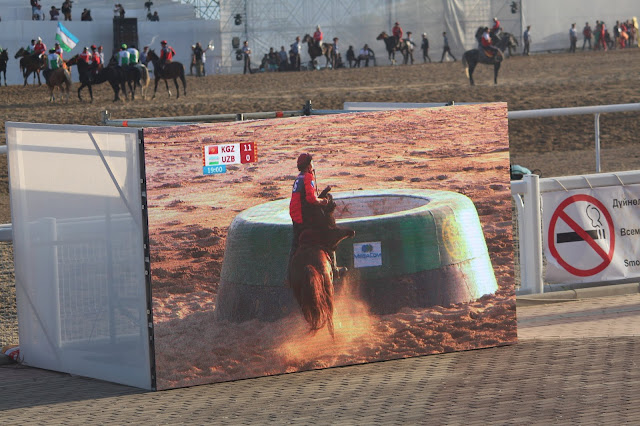 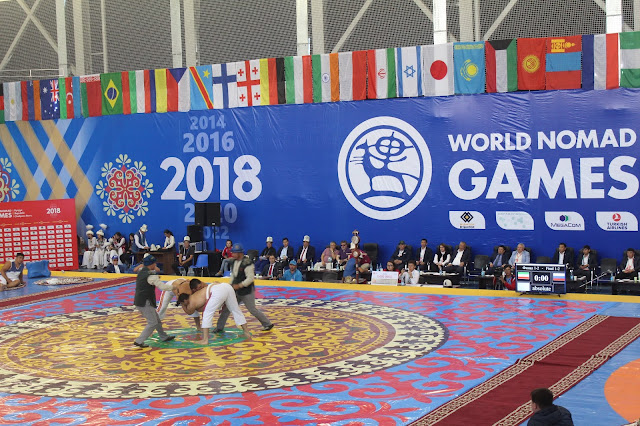 World Nomad Games is the reason behind my trip to Central Asia. I read about the event online and were quite fascinated by it. It was World nomad games which introduced me to this region. It was the 3rd edition of this sporting event held in Cholpon Ata. Cholpon Ata is 2 hrs ride from Karakol. It is absolutely free to watch a match at World Nomad Games. I managed to see two sporting events. The first one I saw was the Kok-Boru tournament. Kok-Boru is the sport kinda similar to Polo. Instead of putting a ball into the Goalpost, one need to put Goat Carcass into the round shaped Goalpost(see pic above). Did I say similar? 😉 It is hugely popular in Central Asia. Kyrgyzstan team played brilliantly. They won the final against Uzbekistan with a huge margin. At one point the score was 11-0. The final score was 32-9. Second one I saw was the wrestling tournament. It was an exciting and sometimes goosebumps-inducing experience. During breaks, we were entertained by the beautiful folk music. 16 wrestlers from different countries were competing for the title. Wrestlers from Russia and Iran reached the final. I was rooting for the Iranian wrestler from the beginning. He did exceptionally well but in the end, the Russian wrestler won. 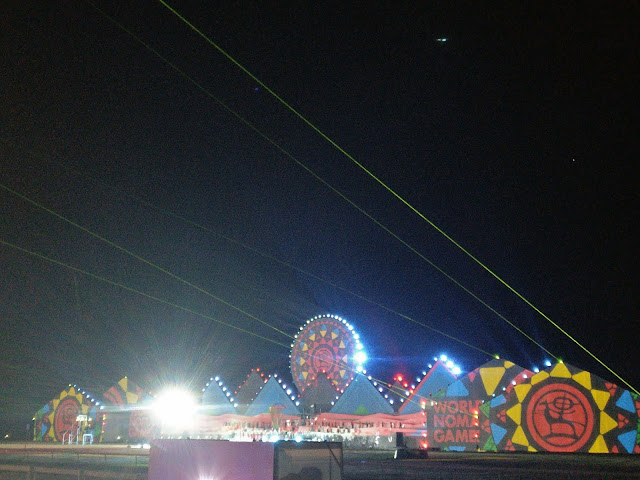 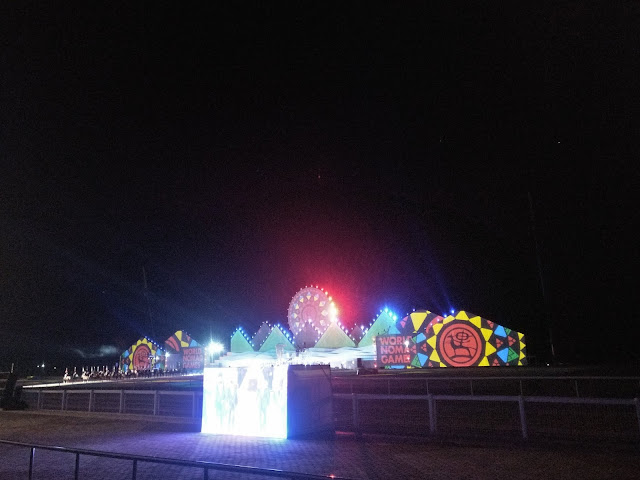 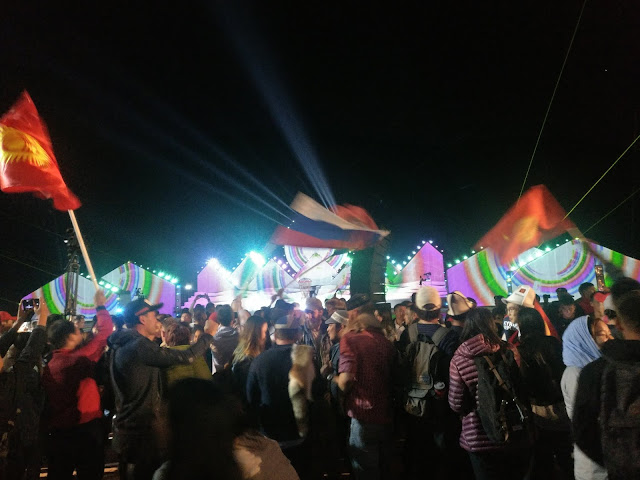 I attended the closing ceremony of World Nomad Games. Attending the closing ceremony is not free. The show started with the usual bureaucratic speeches but soon delve into song and dance sequences. It was like watching a Bollywood night in a foreign language with a laser show. Even though I was unable to understand a word they’re singing but the music and the atmosphere sets my foot tapping. And I’m the last person in any event to dance! People were truly enjoying the night. It was a perfect birthday night for me. Yep, that’s right. Check below for complete details!

I celebrated my birthday abroad for the first time ever i.e. 8th September. It was truly memorable for unorthodox reasons. I was in a land known as Kyrgyzstan where no one knows me, forget about my birthday. Strangely I felt good about it. Maybe cause I’m an introvert. I decided to buy some cookies and distribute them among the people I met during the day. So at the end of the day, I got birthday wishes from policeman, Security guard, Waitress, Hawker, Bus driver, group of kids, people who helped me with directions… It was a great feeling. I spend the majority of my day at Lake Issyk-Kul. Even got a discount by showing my ID proof for parasailing as a birthday gift 😉 After the quiet and fulfilling day, I do have a loud party at night when I attended the closing ceremony of World Nomad Games. It is one of the most memorable birthdays of my life.

Now, you must be curious about the questions like How costly is Kyrgyzstan, Language barrier, Food, Transportation, Visa, Currency, SIM cards. Well, worry not. I got it all covered. I wrote a detailed post about it here: Practical Guide To Central Asia. 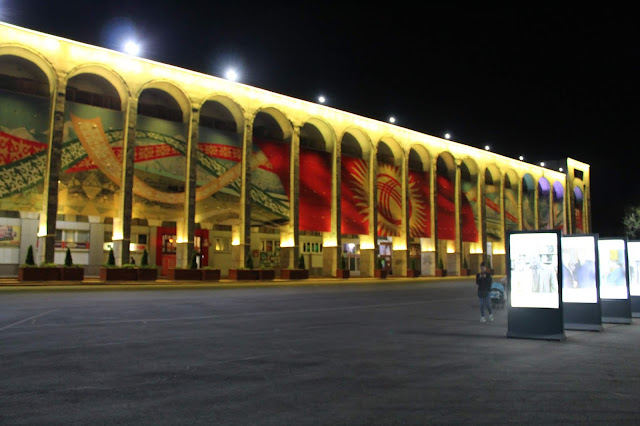 An Indian In Uzbekistan: Bollywood, Babur And Blessings