After Uzbekistan , Kazakhstan , Turkey, In my fourth post of Q & A Series With Locals, I interviewed Iuliana from Romania. We got in touch via Facebook. Iuliana with a letter “i” not ‘L” (She made ensure to clear the confusion) is a travel writer who believes in slow, authentic & flexible travel. My first introduction of Romania was when I saw the heartbreaking Romanian film “4 Months, 3 Weeks & 2 Days” during my Cinephile days followed by several other Romanian films. I was fascinated by the country and wanted to visit it during my trip to Europe but changed the plan. I learnt a lot about Romania after the interview and would love to visit Romania in the near future.

Q & A WITH IULIANA FROM ROMANIA

Please tell us about yourself.
I am born and live in Romania. My hometown is Sibiu – a small medieval town in southern Transylvania. I was an architect in Bucharest (the capital of Romania) for almost 10 years, then gradually switched to tourism in historic centres when I moved to Sibiu in 2010. In 2012, I got a tour guide license and ever since I’ve guided travelers through the maze of Sibiu’s medieval streets. In 2015, I wanted to somehow merge my passions for traveling and writing, I graduated a travel writing course, launched my travel blog Authentic Travels, and started to write travel articles for various magazines worldwide.

How many countries have you visited so far?
I think I have visited somewhere like 30 countries so far. But what I really call ‘visiting a country’ is exploring that country for a while and going in almost all its regions. When I was young, I visited only cities in most of the European countries, but since 2014 (after quitting my regular job) I’ve started to explore countries as a whole for longer periods. Thus I visited Morocco, Hungary, Nepal, Thailand, Jordan, United Arab Emirates, and all of the Balkan countries (Slovenia, Croatia, Bosnia Herzegovina, Montenegro, Kosovo, Albania, Macedonia, and of course Romania).

How would you describe Romanian people?
Romanian people are very smart, always fight for their rights, and rarely give up. Throughout Romania’s history, you will always read how we fought to stop Ottomans’ and Tartars’ Invasions. Then there was the Revolution from 1989 when communism finally fell in Romania. Otherwise, we are peaceful people, never invaded our neighbours, we lived in peace and have good relations with everybody.

How would you describe Romania?
Romania is a middle-sized country in south-eastern Europe. It is a very diverse country, with terrain varying from high mountains in the centre to large plains and gentle hills at lower elevations. We have a shoreline to the Black Sea and even the Danube Delta. Transylvania (a historic region) is incredibly picturesque with it’s rolling hills covered with fruits orchards and fortified churches that stand in Saxon villages. Moldavia region is interspersed with Orthodox monasteries and painted churches, whereas Oltenia region has lots of wineries and agricultural fields.

How well does people in Romania speak English on a scale to 1-10?
Maybe 7… Truth is that elder people have never had the chance to learn English because they were forced to study Russian during the Communist regime. Young people widely speak English though, we study it in school, and then there are many foreign companies that open up in Romania and people need to speak English. In the villages, people will speak little English or maybe not at all, whereas in the bigger cities and in the capital Bucharest, almost everybody knows English well enough to have a conversation. Romanian is the official language of Romania.

How to say some key phrases in Romanian?
Bună dimineața / ziua/ seara – Good morning / day / evening
Noapte bună – Goodnight
Salut, ce faci? – Hello, how are you?
De unde veniți ? – Where you come from?
Unde vreți să mergeți? – Where do you want to go?
Cât costă? – How much it costs?
Une pot să schimb bani? – Where can I exchange some money?

Which is the best/essential local food to try in Romania?
The best local food to try is ciorbă de burtă (tripe soup) and mici cu muștar (small sausages made of minced meat). You can find these traditional dishes in every restaurant and sometimes, you can find mici at street food stalls (not very popular though). In terms of sweet dishes, papanași cu dulceață și smântână (fried cheese donuts with fruit jam and sour cream) are the most widespread dessert you can find in all restaurants.

Which is the best/essential local drink to try in Romania?
We have lots of local beers such as Ursus, Silva, Nenea Iancu, Tuborg – you can find these ones in many variants (blond, dark, filtered, unfiltered). Wines are also widespread as we have many vineyards in the hilly regions of the country. Popular varietal wines are Cotnari, Murfatlar, Busuioacă.

Which is the best/essential festival to attend in Romania?
One of the best festivals to attend is the Medieval Festival in Sibiu – it takes place at the end of August each year. On this occasion, you can see craftsmen working in the street, puppet shows, medieval theatre in the street, medieval dances performed in squares, and of course concerts with medieval music and costumes.

Which sport are Romanian people crazy about?
Football of course. Men love to gather and watch a football match while drinking lots of beers.

Which are the best cities/places to visit in Romania?
The cities that have preserved a historic center are located only in Transylvania and these ones are the Saxon founded towns of Sibiu, Brașov, and Sighișoara. Cluj Napoca also has a well preserved historic center and Timișoara and Baia Mare too. Unfortunately, many old towns in Oltenia and Moldavia regions had interesting architecture but Ceaușescu (the communist dictator) demolished many of them in order to build new communist apartment buildings. You can still find old houses and isolated streets with old architecture in Iași, Botoșani, and Suceava but these ones are pretty rare.

What are the landmarks and hidden gems of Romania?
I would recommend many Saxon villages in the southern part of Transylvania. They feature fortified churches – a unique phenomenon in Europe which is very widespread in the region (over 200 churches with well-preserved fortifications and creative defensive elements). Seven of these villages have been nominated as Unesco sites but this doesn’t mean they are crowded with tourists. Biertan, Valea Viilor, and Viscri are the most famous ones, while Prejmer, Dârjiu, Saschiz, and Câlnic have also innovative solutions in terms of defensive architecture.

Even if we are not famous for our cheese variety, Mărginimea Sibiului is a region near Sibiu town and there you can find no less than 18 Romanian villages of shepherds. Besides the tradition of producing sheep cheese, these villages are also located at higher elevations so that the hilly-mountainous scenery is absolutely idyllic. Head from Sibiu on the road snaking up to Jina and you will be amazed what a great local culture you can find there.

What are the most popular stereotypes/cliches about Romania?
The Dracula Legend is the most famous thing people know about Romania. When I traveled to Thailand, I met many people that knew only one thing about Romania – DRACULA. It is true we have the legend of Dracula, who was actually Vlad Țepeș – one of the Romanian voivodes that ruled in the Middle Ages and he impaled war prisoners, especially the Ottomans. But Romania is not only about Dracula and Vlad the Impaler. You can easily travel throughout Romania for a couple of months and not have seen all the interesting and historical places because they are simply so many.

Which is the best time to visit Romania?
Normally spring and fall should be the best times to visit, although sometimes it may be pretty cold in these seasons too. June and July are usually rainy, while August very hot. However, fall is definitely the most photogenic season in Romania when all the trees change their leaves and are very colorful.

Are there any local customs a visitor should be sensitive to?
We don’t have local customs that should be considered by a first-time visitor to Romania. You can enter all the churches and other religious sites without any problem. But maybe you should know that our museums have a special tax for taking pictures and videos beside the normal entrance ticket. So if you want to take pictures, you’ll have to pay much more. 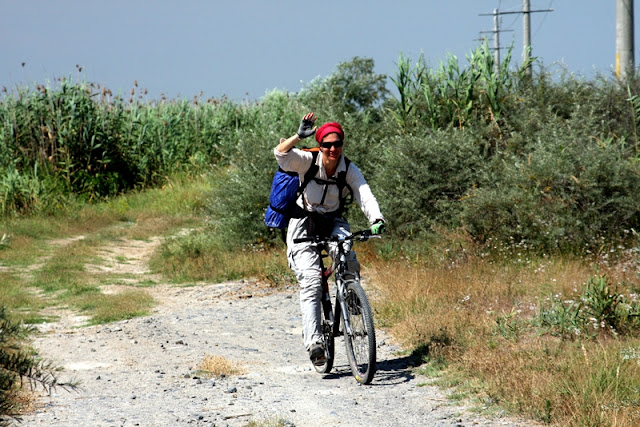 Pictures courtesy: Iuliana M.
When I asked her to share an interesting picture of her. She chose the above one.

This is me pedalling in the Danube Delta region. I enjoy exploring foreign places (and my own country, Romania) at a slow pace. Actually, my travel motto is ‘Travel at your own pace.’ If traveling at a slow pace is pedalling a bicycle, it means this is the best means of transportation in that region – sometimes is a train, sometimes a car, but in the Danube Delta is a boat either a bicycle.’