After spending almost 9 months in Colombia which includes almost 6 months of Quarantine thanks to the pandemic, I decided to travel to Mexico since my original plan to travel all over South America was not feasibly possible. I was excited to explore a new country and test my newly acquired Spanish in another Spanish speaking country. I pick Mexico for two reasons: Firstly, the country was functioning almost normally (Mexico never closed their border) and secondly, it was cheaper and easier to return back to India from Mexico. I spend 3 months traveling in Mexico before taking a flight back to India in the month of February in the current year. My first stop in Mexico was Mexico City, also known as CDMX (Ciudad de Mexico). This post is about my trip to Mexico City aka CDMX!

I took a flight from Medellin, Colombia to Mexico City in the month of November last year.  I reached Mexico City early in the morning and after reaching my hostel, I went straight to bed. I woke up in the evening to meet an Indian couple who spend their lockdown in Mexico as I did in Colombia. They have been living out of their suitcase for more than 3 years now while traveling around the world. We met at a cafe and had a long conversation and they gifted me a box of Indian sweets. I was overjoyed to eat Indian sweets after a long time! It was so great to talk to fellow Indians face to face after such a long time. They invited me to the Diwali party at their apartment which was a day later. It couldn’t be more perfect to spend a Diwali night with fellow Indians. I went to their apartment in the Roma neighbourhood of Mexico City. They prepared South India style chicken biryani which was finger-licking good followed by Samosas and Kachoris ordered from the local Indian restaurant. It was so delicious and authentic as compared to the travesty I ate in Medellin, Colombia during the lockdown. I met another fellow Indian from South India there who live in Mexico. Also, there was an American-Mexican Couple. We had a long conversation while sipping on the local tequila till really late in the night. I got some really good insight into the new country I was going to explore. Finally, I bid them goodbye and took a metro back to my hostel. Mexico City metro is the cheapest metro I have been on at only 5 Mexican pesos! 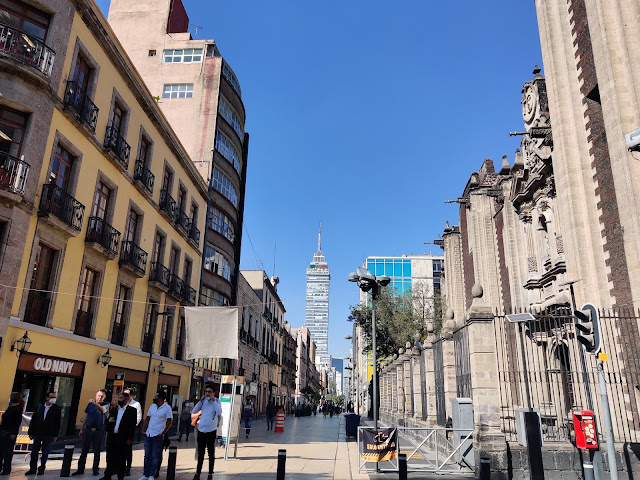 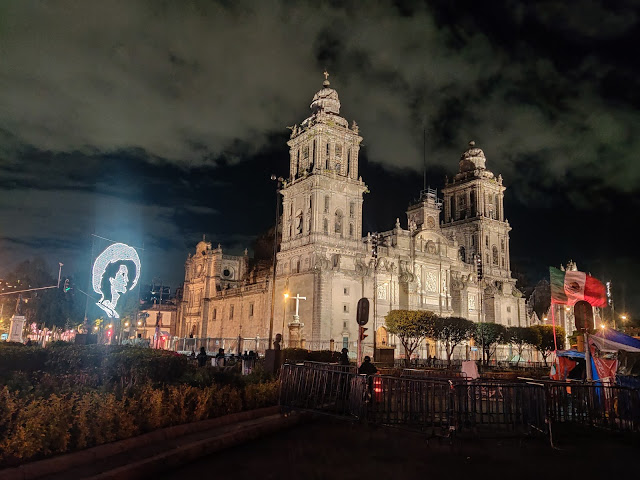 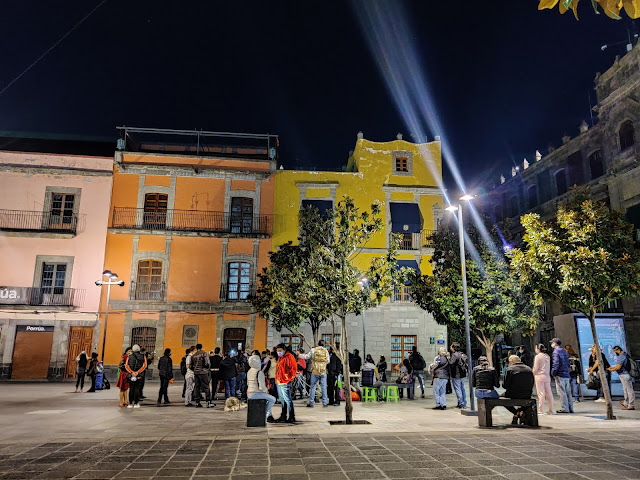 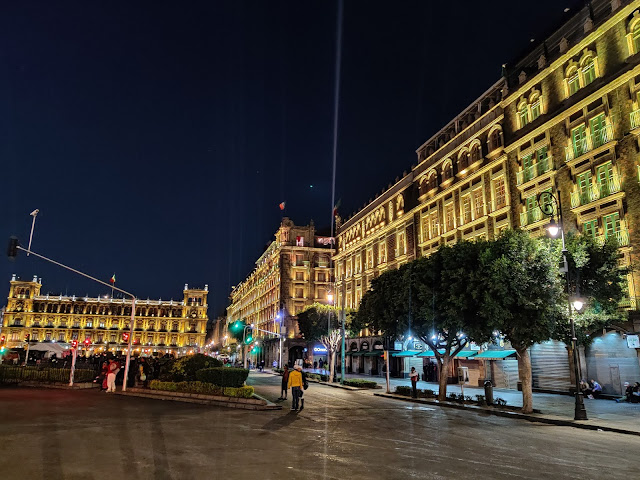 So my visit to Mexico City was marred by the still ongoing pandemic. Several museums/historic sites were closed. I was staying in the city centre near Zocalo. Zocalo is the main square in the city centre. I went to the cathedral in the city centre which is truly stunning. A stone’s throw away from the cathedral, you will find the Templo Mayor. It is the main temple of the Mexica people. It was destroyed by the Spanish invaders in 1521. Now you can see the ruins of the temple. The historic city centre has so many beautiful buildings with stunning European architecture. One such architecture gem is the Palacio de Bellas Artes. Unfortunately, It was closed to the public during my visit. There are so many taco joints in the centre. I had way too many tacos during my short stay haha. There are several markets around the historic city centre where you can find cheap stuff. Torre Latinoamerica was the tallest building in the whole of Latin America at the time of its construction which is in the vicinity of the historic city centre. Alameda Central Park located in the centre is ideal for a morning walk. The best way to explore the city centre is to get lost in It while walking. 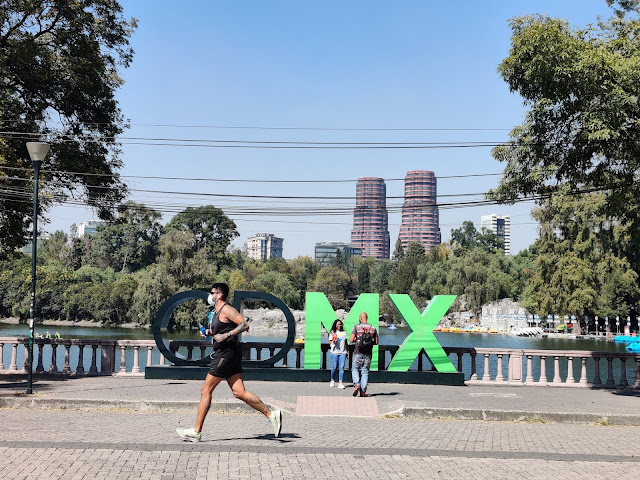 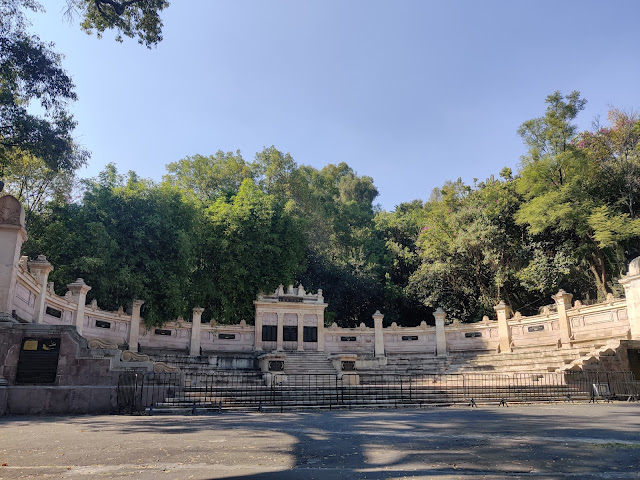 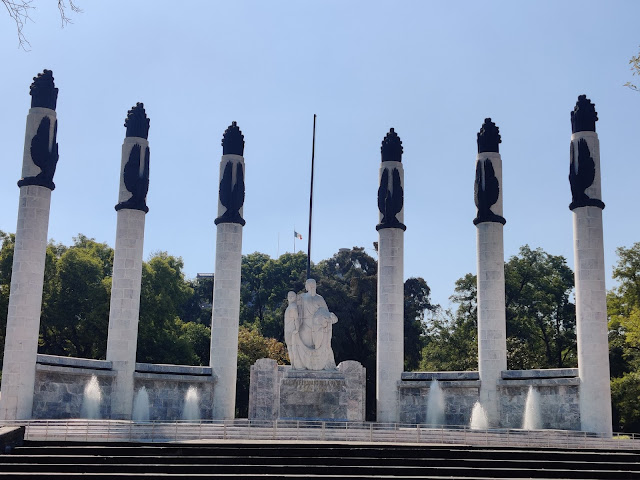 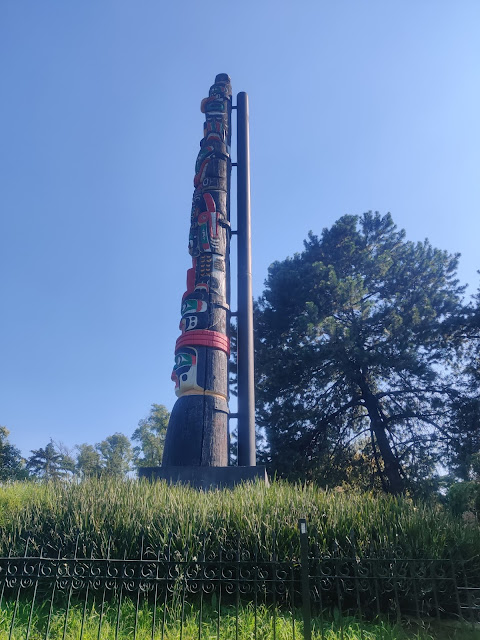 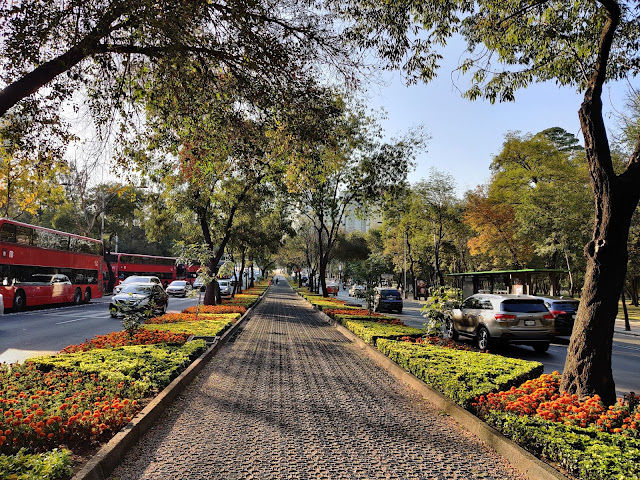 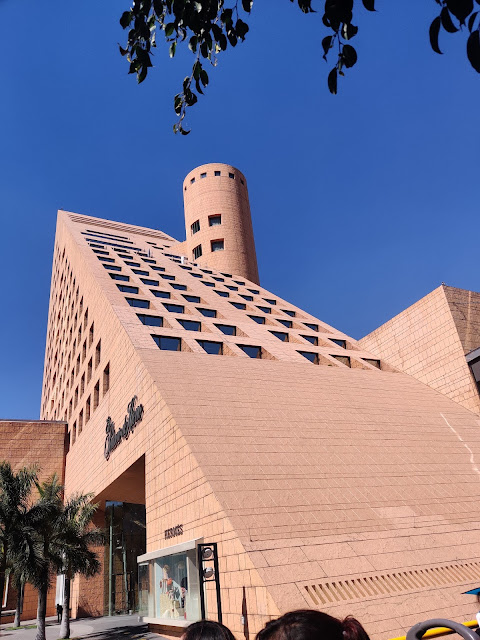 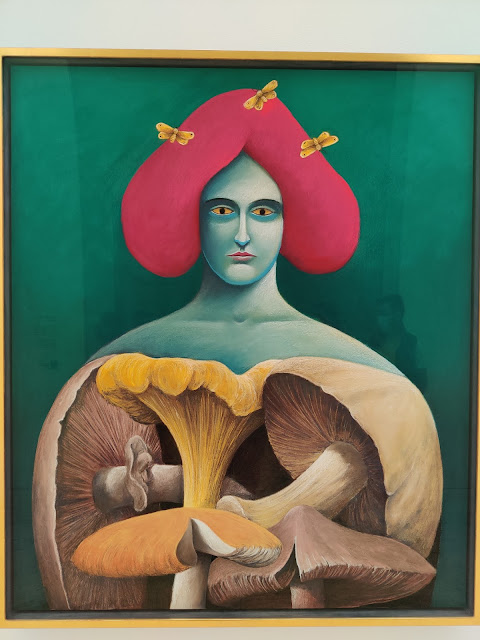 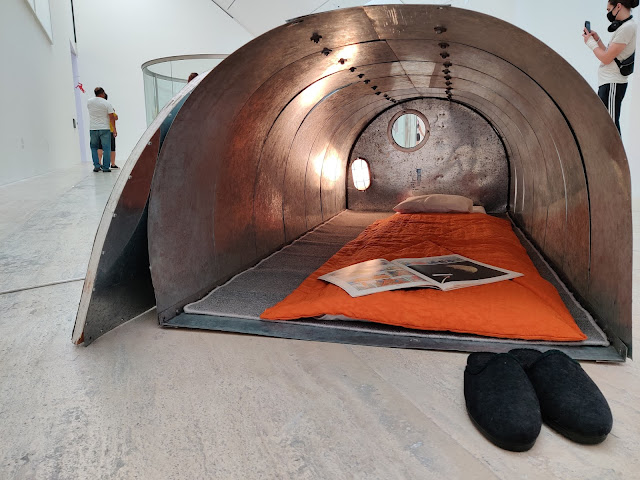 Chapultepec Park is my favourite place in Mexico City. It is the second-largest park in Latin America measuring over 1700 acres. You need a whole day to explore it. There’s a castle, theme park, lake, zoo, museums, food joints, markets to keep you occupied. Several things were closed during my visit and therefore I just wander around in the park and when I got tired, I took a nap under a shade:) It is a perfect place to explore by bicycle. Since I am not a fan of big cities, I visited the Chapultepec park twice even during my short visit to Mexico City for the much-needed break from the maddening crowd. Palanco is an affluent neighbourhood in Mexico City. Cool looking buildings, upscale shopping malls, expensive cafes & restaurants and several parks. I explored the neighbourhood on foot before visiting the Soumaya Museum and Jumex Museum. There was no entrance fee for both the museums. Soumaya museum had 6 levels while the Jumex museum is much smaller as compared to Soumaya museum. While Soumaya museum had different times and kinds of art/art pieces while the Jumex Museum has more contemporary art. They are both situated in the same compound. 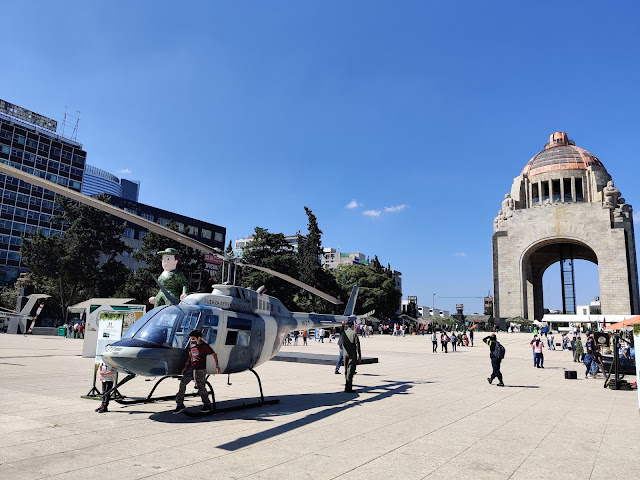 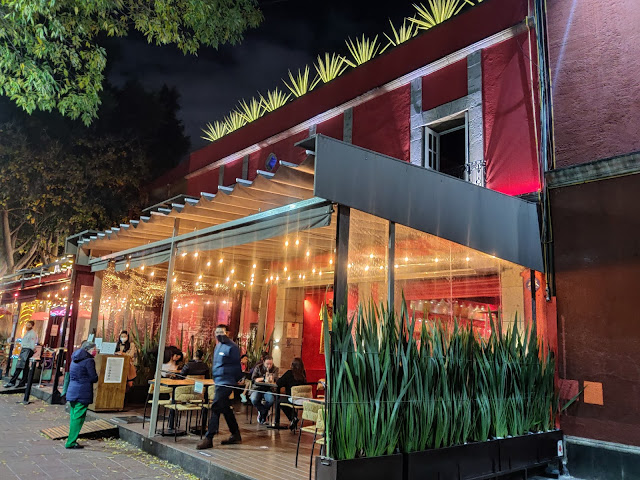 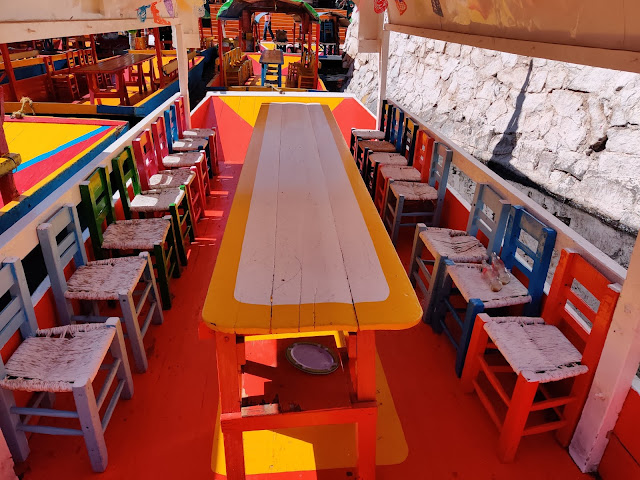 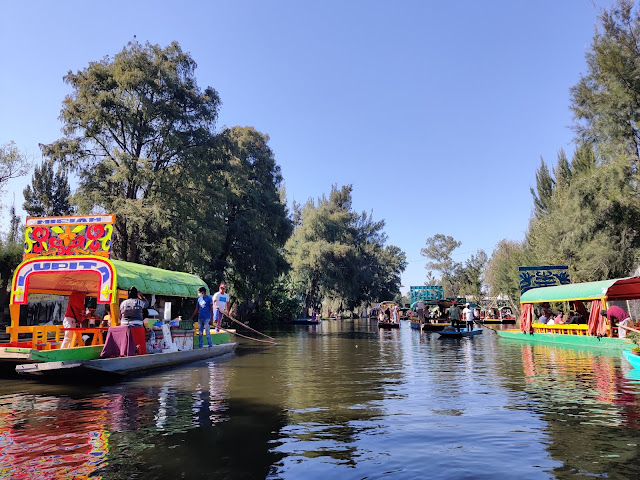 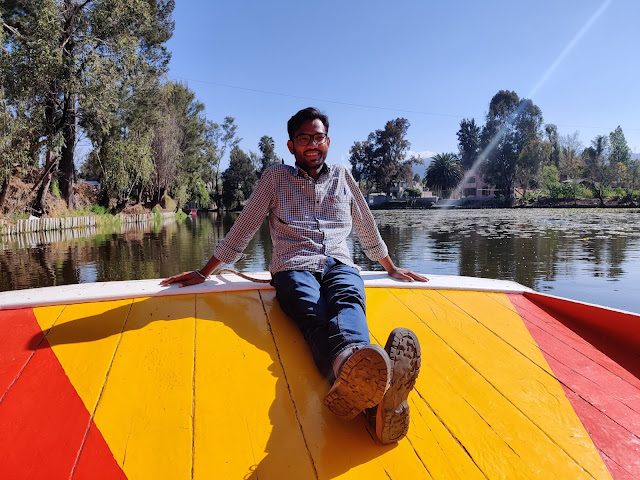 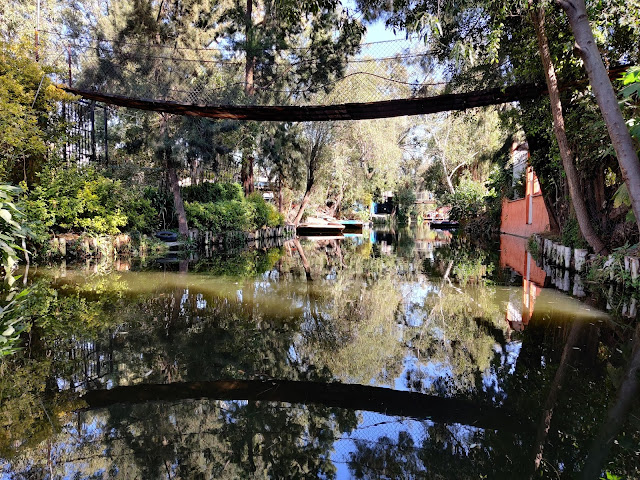 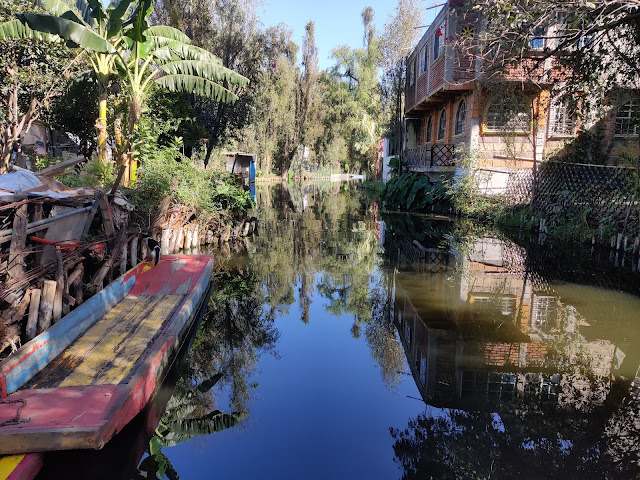 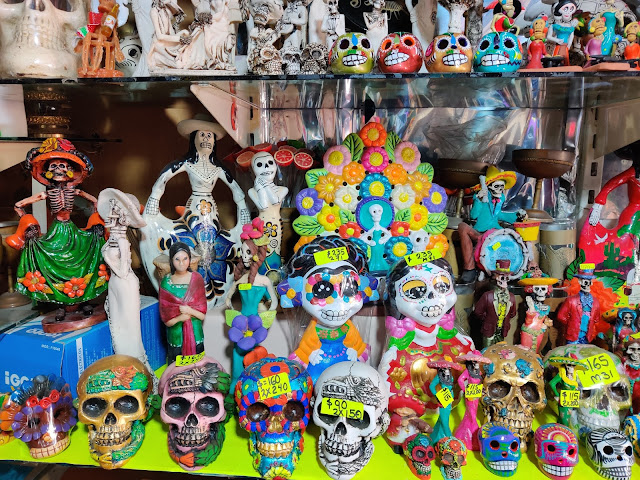 A DAY TRIP TO COYOACAN & XOCHIMILCO

On my last day in Mexico City, I planned a trip with the local people from Mexico City whom I met through Couchsurfing to go to Xochimilco and Coyoacan. We planned to meet at the monument to the revolution in the morning. It is a landmark monument commemorating the Mexican revolution. Xochimilco is half an hour drive from there. We were 4 people. I, a bit pompous girl from Ecuador, a Mexican girl and a Mexican guy who was clearly in love with this Mexican girl but for now they call themselves “Friends’. The Mexican guy brought his car and drove us to Xochimilco. We made a quick stop at Frida Kahlo Museum which was closed on that particular day. Xochimilco is known for its canals and Trajinera boats which reminds me of Shikaras in Dal Lake, Kashmir.  We took a boat tour(a couple of hours long) in the canals while making several stops in between. You can find all sorts of boats in the canals like the one with food, drink, flowers and even the one with the mariachi band! The Mexican guy paid the mariachi band to play for the Mexican girl. I was really impressed by his gesture but if only the Mexican girl was half impressed as me haha. It was so beautiful to hear them play. We made a stop at a local house during our ride for the bathroom break. The woman of the house offered us the local beverage called Pulque. It is one of my favourite beverages from Mexico. It is an alcoholic beverage made from the maguey(a plant native to Mexico). It has the colour of milk. You’ve got to try it when in Mexico! After the pleasant boat ride, we head back to the neighbourhood of Coyoacan. Coyoacan is a former village. It is known for its many restaurants, cafes, cantinas(a type of bar), museums, bookstores and other cultural attractions. We had dinner there before heading back to the city. The Mexican girl got really drunk and weirdly start talking in English while singing her lungs out in Spanish on our way back to the city centre, She was clearly having time of her life haha while her friend-cum-future(hopefully) boyfriend amusingly taking care of her. 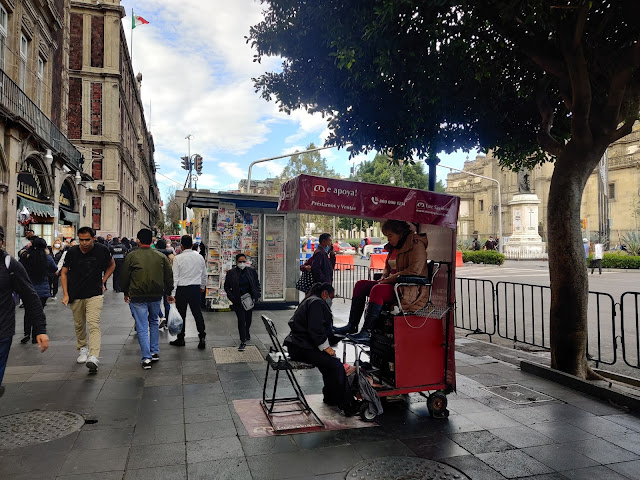 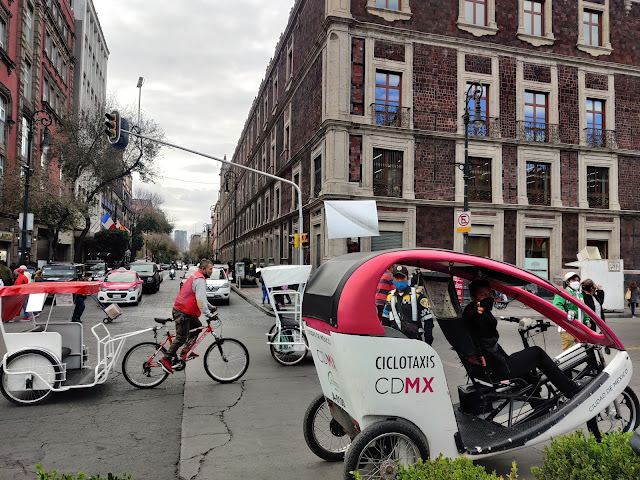 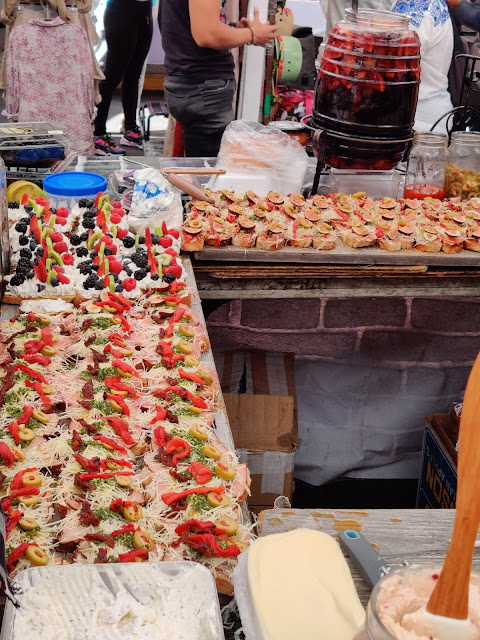 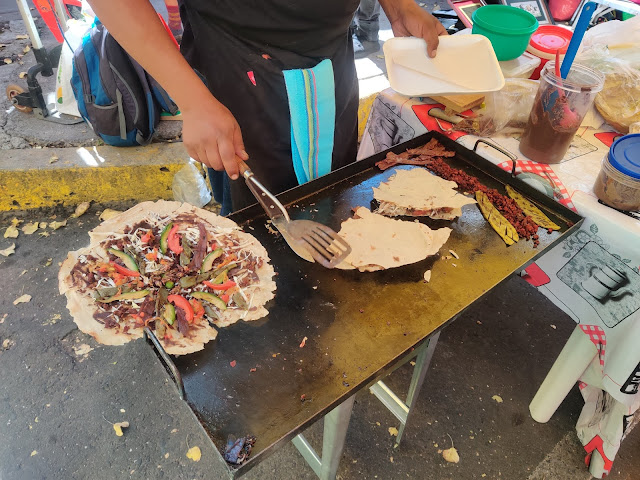 MY FIRST IMPRESSIONS OF MEXICO

My philosophy is never to judge a country and its people by its big cities. So I am going to write taking into consideration my 3 months long travel to Mexico. Mexicans are soft-spoken people and it was the best part for me as they speak in a low pitch manner which made me understand them much better than Colombians. While traveling on a metro train, I was always helped by strangers. Mexicans came across as helpful and warm people. The thing which I really like about Mexicans is the way they speak and treat each other with such grace and compassion. Let’s talk about food! One day, I went to a local market and ate much more than I can digest! Local markets in Mexico City is a great place to eat. Many people told me before I reach Mexico that I am going to love Mexican food because they use a lot of condiments like we Indians use in our food and unlike Colombians. And the people were right about that! Mexicans are not health conscious like Colombians which can be clearly visible in their way too many Oxxos (A supermarket chain that sells only junk food, alcoholic & non-alcoholic beverages and snacks high on sugar and sodium). You don’t have to find an Oxxo in Mexico City because it finds you haha. Mexico reminds me of the USA in terms of their eating habits/culture. In terms of cost, Mexico is expensive than Colombia. Even more so in North of Mexico(as told to me by the local people as I have not traveled to North of Mexico). After my visit to Mexico City, I took an almost day-long overnight bus to my next destination in the south of Mexico.

Must Visit Attractions In Chiapas, Mexico

A Complete List Of Must Visit Towns In Colombia + My Experiences